I am supposed to be working right now, so of course I am Googling Kanye West albums and figuring out my own ranking of his top three. I am doing this because I have just read of the Kanye West-based matchmaking service, Yeezy Dating, launched by a kid named Harry Dry who (allegedly) believes that “Life of Pablo” is Kanye West’s best album. This is clearly, horribly, terribly wrong. Obviously the ranking goes: 3. “Graduation”, 2. “808s and Heartbreak”, and 1. “My Beautiful Dark Twisted Fantasy”. OBVIOUSLY. What is wrong with kids today?

The thing that I have discovered about my bewilderment when confronted with modern music tastes is that I am offended by my own bewilderment. I am offended because this bewilderment makes me feel old. Like, okay, I am repeating myself like an old lady who tells the same story over and over again, but Drake sings like he’s got a clay mask on and it’s rapidly drying but he keeps trying to sing his way through it. And I cannot emphasize the confusion I felt when, while watching a rerun of the “Ellen Degeneres Show” (I know I’m old), I caught a Travis Scott performance and then spent all day listening to his music to confirm 100 percent that I absolutely hated all of it. I don’t understand this stuff, like how cavemen feel about lightning and fire.

Other things that make me feel old:

Almost all Thai universities benefit from outdoor markets, and Srinakharinwirot University (referred to as “Saw Nor Wor”) is no exception. Its market is open on Tuesdays and Thursdays, so if you amble up on a Friday, like I did last week, you are shit out of luck. My friend Vincent told me about it when we were arguing about the state of Thai street food on camera one day, and although we agree to disagree re. all Bangkokians’ access to street food, we do agree that the SNW market is pretty awesome.

This place has everything, including an elusive yum naem sod (fermented pork salad) vendor who also serves khao chae (summertime rice) in season, a woman whom Vincent assures me is real and absolutely not made up like a unicorn or a mermaid.  Although I have yet to try this woman’s food, I did have some lovely khao yum (Southern Thai-style rice herbal salad) and some salad rolls that I immediately regretted purchasing. There was Thai-Vietnamese-style kai kata (egg in a pan) with corresponding kanom pang yad sai (bun stuffed with Chinese sausage and steamed pork loaf), as well as some harder-to-find offerings like mee kati (noodles in coconut milk) and something called Hong Kong noodle, which is reminiscent of the “complicated noodle” at Greyhound Cafe.

There are also old-fashioned Thai desserts and sweet snacks like tako (pudding with coconut milk topping) topped with flecks of steamed taro or mango. 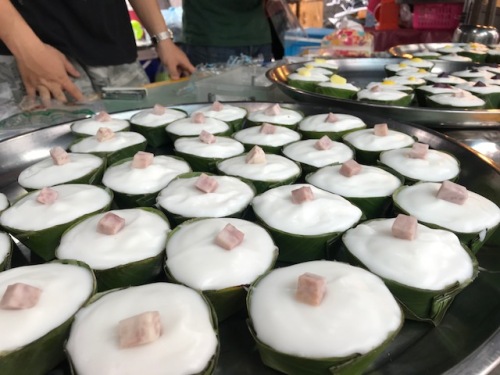 There were also fresh fruits and vegetables, drinks and even fancy items like organic melon, grown via university project, Vincent says. The only drawbacks, I’d say, are the dozens of fried items on sticks sent to torment me into abandoning my diet and the blaring, intense summer heat, which might be the worst it’s ever been. Of course, the university students continue to munch outside unruffled by the weather, unconcerned about the coming apocalypse — another great thing about not being old, when you start sweating profusely and embarrassing your dining companions.

I’m so gifted at finding what I don’t like the most. So I think it’s time for us to have a toast.  Here’s to the Travis Scott generation.