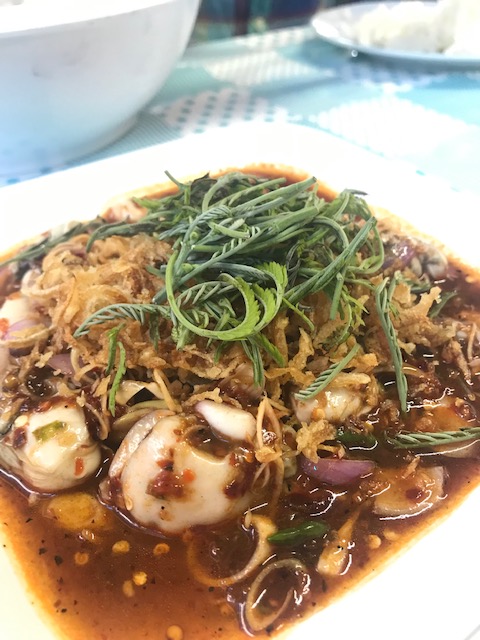 A spicy oyster salad with horse tamarind leaves at Fah Mui. I was afraid it wouldn’t end well for me, but I’m fine thanks for asking

Cultural appropriation is a tricky thing. The idea that a white chef shouldn’t cook Asian food is ridiculous, as it is when it’s an Asian chef cooking Western food. Brought to modern music, it’s even worse — all forms of modern music were appropriated from black people, for example (do you remember when Eric Clapton did “I Shot the Sheriff”? He was the Cliff Richard of the ’70s.) When you get to clothing and who gets to wear a sari or cheongsam, it becomes completely bewildering, especially from the eyes of Asians living in Asia, who think anyone willing to spend money for any of their stuff is A-OK.

But then when you seek to “improve” on the “yucky” food of a minority group, you rightfully get into trouble. That is because it doesn’t come from a place of love or respect, and it builds on a long history of devaluing other cultures in favor of the ruling one. I once attended an exhibit on the history of the Chinese-American restaurant in New York and it detailed very clearly how, from the very first restaurant in San Francisco, the food had to be marketed as cheap and convenient in order to compete. Burgers and steaks still had to be on the menu, along with “fusion-y” creations like chop suey. The first fortune cookies were actually a Japanese-American creation, but after the inventor was put into an internment camp, the Chinese took over.

Despite the kitschy, “inauthentic” connotations ascribed to it now, Chinese-American food became a thing that people genuinely love, and an example of how a community assimilated and survived by adapting its culture to that of its new host. The changes that were made to it as time passed (or in some cases, the gradual reversion to the real thing) serve as historical documents themselves.

Thais are doing this now, with the inclusion of Chinese dishes on their menus and a change in flavors that may have dismayed some native-born Thais to such an extent that they invented a a food tasting robot (I will never forget). But it, and the Chinese-American food that came before it, is still only really accepted if it knows its place, asking for less money than its Western counterparts.

“Leave the fine dining to the Europeans,” someone once wrote on a message board controversy sparked by a story I wrote on Bangkok’s new fine dining restaurants (LOL at old people who can’t read timelines). I don’t remember the problem with the story — aside the fact that people think I am a poorly paid 25-year-old intern. HELLO I am a poorly paid 75-year-old intern! — but I will always remember this stupid dumbass comment, and feel rage. This comment is racist. If you don’t see it, I’m not going to help you. I’m done with that. Asian food is just as good as anyone else’s food, and should cost what it’s worth. That is why I so admire ladies like Jay Fai and Pen, who despite a lot of pressure have kept their prices at a place where they feel properly compensated, and have kept their food at a high quality as a result.

The restaurant I’m writing about today is not an expensive one though. Hahaha.

It is, however, very good, an example of a cuisine that, even when you leave it alone at home, still manages to evolve and change. I’m talking about Thai food in Hua Hin, specifically at Fah Mui (20 Naresdamri Road, 082-587-4659). I’m talking about their gaeng prik nok (bird’s eye chili soup). Tell me this is an old-age Hua Hin thing, because I have never seen this before, and I have been to Hua Hin a time or two or three.

The sign looks like this. It’s kind of hard to find because it’s just a door (decorated with a bull’s skull with red balls for eyes). Look for the mayom fruit tree. The door will lead you through a narrow walkway to the restaurant behind, which looks out over the water. It’s basically an aharn tham sung (made to order) stall with a view.

The soup comes from this paste, which the cook tells me is just shallots, shrimp paste and chilies, just like a regular gaeng som (sour curry). It’s not, of course. It’s tart, salty and spicy like sour curry, but there’s definitely plenty of sugar, and an added bonus of fresh holy basil leaves that echo the sweetness and make it resonate (I am writing like Jewel sings, kill me now).

The paste turns into this soup, bristling with fresh seabags and fish eggs. I only remembered to take this photo at the very end because I have better things to do than taking photos all the time, like fighting off my family for more soup:

There’s more stuff that I don’t remember, but I do recall these fish egg sacs fried with garlic and meant to be dipped in a sweet chili sauce, but come on, that’s just gilding the lily:

There is also a terrifying gaeng pa (jungle curry) and succulent deep-fried pork ribs. There is whole deep-fried seabags in more garlic. There is more, but I have forgotten, because there was so much. It is food that is a perfect historical document of the times we are living in right now. Too bad it’s all in my stomach.