Glutton Abroad: Doing as the French do

Sometimes I am perfectly happy acting like a tourist, out with my big old map and geriatric footwear, embarrassing all and sundry with my lack of knowledge about how to act in public. But once in a while, I’m tired of my day-to-day life in Thailand. Sometimes, I want to spread my wings and travel a bit. That’s when I go abroad — this year, to France. Our trip, via @SpecialKRB’s fantastic photos:

We stayed in the “Perigord Noir”, so named because of the abundance of prehistoric dwellings in the area and known for its delicious walnuts, lamb, ducks, geese — and, of course, this:

Staying in a house allowed us to delude ourselves into thinking we could act just like the locals — zipping to and fro in tiny little cars, wearing berets and making fun of other people just like us (for the record, they really do wear striped shirts!). So we did just that, even after getting back to Paris, using the ample time at our disposal to do Frenchie French things like:

Buy lots of cheese at Barthelemy

Gorge on lots of lovely meat

Dine on mussels, even though I think they are Belgian

Order delicious escargots at every meal

Partake of the local fruit and liquor, at the same time

Mess up our recycling

Try out the lovely French squatters (for the record, far more challenging than the Thai ones. The footrests are lower in level than the surrounding basin, ensuring that you will most certainly splash your own feet — lovely.

And, finally, sup at one of the most popular restaurants in all of France

The unseasonably wet weather and ensuing traffic snarls have put me into a meditative mood. So indulge me for a moment as I blather on like your 84-year-old great-aunt, the one who doesn’t see people very often and puts SWAT-team-level preparation into “going out”.

Because that is how I feel nowadays. My Thai has never been the greatest — conversations frequently turn into an unwieldy catalogue of what has NOT been said, a litany of all that has NOT been communicated. I am literally two-dimensional; beyond initial remarks on the weather, what to eat and where to go, I am cashed out of words, making do by playing the role of the dim-witted auntie, a role I am getting unnervingly good at.

This is leeching into my English language communication, which is fast becoming a halting negotiation of what to express and what to leave out. Interaction is Thailand is an unspoken deal: say the expected things at the right time and you will have passed. Saying something different means you have not kept up your part of the bargain. This is something that has taken me years to learn, but is somehow understood by Thais who have grown up here — just like everyone knows you don’t eat durian with alcohol, or without mangosteen, or that you don’t transport it on the Skytrain because then people will look at you like you just took a baby, a kitten and a puppy and forced them to listen to the Black Eyed Peas’s latest album. All Thais somehow know these things.

So food is a wonderful oasis for me. When you are cramming your piehole with stuff, you don’t have to talk. When your table is groaning under the weight of tasty food, people around you are happy. When you venture to talk about this dish or that, people are invariably willing to discuss it — food is a fine, happy place, where everyone loves you, as long as your plate is still full.

It’s logical, then, that I would love Restaurants of Bangkok, which offers a nifty monthly program they call “Running Dinners”. Every course — appetizer, main, dessert — is offered at a different restaurant in the same area. Despite the logistical difficulties of herding up to 20 increasingly inebriated people to different places every hour or so, it’s surprisingly well-run, and a great way to feature restaurants that are new or easily overlooked. (In the interests of full disclosure: next month’s dinner includes dessert at Maduzi Hotel, which belongs to my husband’s family.)

Blurry photo of dessert course at Philippe, taken after fourth glass of wine

But I’m an equal-opportunity gobbler (uh, duh). I obviously like to go the opposite end of the spectrum too. Sometimes you need to work a little for your food fix, just sayin (don’t you hate it when people write “just sayin?” Like, didn’t you already just say it? I see it more and more frequently, and it is almost always preceded by something semi-obnoxious — “BLAH BLAH STUPID STUPID MOUTHFART MOUTHFART. JUST SAYIN.” Blech. Okay, rant over.)

So the beef noodles on Sukhumvit Soi 16, across from the Korean restaurant, are also a wonderful refuge for the socially impaired. Beloved by office workers and motorcycle taxi drivers alike, it is the “we are the world” food stall of that particular road, where people can set aside their various color allegiances or complete and total political apathy (I’m lookin at me, Bangkok Glutton) and jostle each other for bowls of delicious beef water instead.

Chef Hiroyuki Sakai of “Iron Chef” fame (the one who cooked French food, as opposed to the “Chinese” and “Japanese” Iron Chefs) came to Bangkok to bring his love of delicate flavors and vegetable flans to food-loving Thais. Last night, he held the second of three dinners at Maduzi Hotel (full disclosure: my husband’s family owns this hotel, but that didn’t save me from having to shell out the 7,500++ baht like everybody else.) Needless to say, I was excited; this is the closest I will probably ever get to Iron Chef without donning a poufy wig and cape.

"Seriously, guys--is there something in my teeth?"

And Chef Sakai totally delivered. His persnickety attention to detail, illustrated by his high hygienic standards (the kitchen was cleaned after every single course), was reflected in a series of perfectly turned-out dishes despite his having to cook for 60 covers. This somehow didn’t affect the pacing of the dishes, which reached perfection at around the end of the meal.

It kicked off with a completely smooth crab flan, reminiscent in texture of Japanese chawanmushi (egg custard), paired with a deep-fried crispy scallop and wasabi sauce to cut the fattiness. 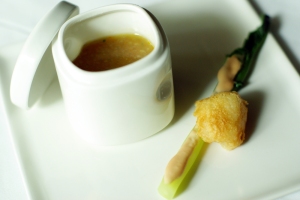 A parcel of foie gras came encased in a mashed potato shell and deep-fried into a golf ball, served atop a pool of truffle sauce and topped with a parmesan tuile.

Sakai’s “signature” dish turned out to be a Thai freshwater prawn tail (the Brittany langoustines shipped to the hotel for the event were unfortunately not up to snuff) wrapped in threads of blanched zucchini, braided Bottega Veneta-style over the lightly poached flesh.

After that, grade 9++ Wagyu beef (apparently the highest grade there is, although I don’t understand why you can’t just suck it up and say “grade 10”) was smoked in the hotel kitchen and arrived to the table wrapped in bamboo skin like a Christmas present.

Finally, a mango custard came layered with a green tea foam and accompanied by a salty chocolate crepe, garnished with a pinch of candied orange peel.

But the best part of the meal, for me at least, was a cold hors d’oeuvre initially described in a preliminary menu as a dreary-sounding “turnip mousse”. What came out of the kitchen was a beautiful mixed custard of Kabu turnip and sea urchin, topped with Alaskan king crab, abalone, fan lobster and scallop chunks, ringed by turnip rounds and topped with a dollop of caviar. It was among the best dishes I’ve had in a while.

This dish is the bomb.

Final verdict? Totally worth it, even if I have to snack on streetside noodles for the rest of the month. I mean, that’s what I’m supposed to be here for, isn’t it?