There are certain ways people are supposed to talk about things. Like, unless you are a commie weirdo freakazoid, you have to say Tim Tebow is “inspiring”, or “great”, or at least “intriguing”. Or, as long as you aren’t one of those strange people who hates freedom and puppies and all things wonderful, you obviously think the “Game of Thrones” HBO series is the best thing EVAH and don’t feel any need whatsoever to read the books, instead harping on and on about how you can’t wait until the next installment airs so you can find out what happens next instead of picking up a book and, uh, actually reading it (no, it doesn’t bother me that much, why do you ask? I’m just plucking an example out of thin air, I say!)

There are also ways, it seems, to talk about whole groups of people. For example, when someone is Asian, they are invariably described as “technical” or “proficient” or, if you are really good at describing, “technically proficient” (read: good at violins and math). Asian food gets similar treatment.  If you write about Asian food, you have to make sure you are as reverent as possible. References to old recipes from the 17th century get you extra points (and more if, like, you can go back to the Bronze Age. Everyone wants to know what those guys were eating!) You should consider it a monolithic “whole” that never, ever changes in order to ensure as much “authenticity” as possible. And, for God’s sake, make sure to use a poncey know-it-all tone so that people who don’t know what you are talking about feel ashamed and bad about themselves. If you cook, everything has to come out properly; if you eat, everything has to be difficult to find and hard to consume.

I try as hard as I can to adhere to these rules. Sometimes it works out splendidly. But today, it might not work out so well, because, to tell you the truth, I don’t know all that much about Isaan food. Yes, you’d think I would, since I know a bit about Northern Thai food and, since Northerners also use sticky rice, then Northern Thai and Isaan foods are OBVIOUSLY ONE AND THE SAME CUISINE. But those uppity Northerners and Isaan-ers insist that their cuisines are completely different. What do they know, right? I just can’t wait for that next “Game of Thrones” episode.

So when I trekked up to the Northeast and had my first bite of thum pa (jungle som thum), I was blown away. Rice noodles instead of grated fruit or veggies? A fishy, earthy dressing, heavy on the fermented Thai anchovy? The inclusion of everything but the kitchen sink: some shards of bamboo shoot, a few stray strands of acacia, a handful of unripe tomatoes, a few lost snails, the occasional bashed-in green bean. Thum pa (also referred to as thum sua or thum mua, “confused thum“) incorporates what Isaan is all about — fire, earth, and even water (if you include those fermented fish) — with the relatively newfangled addition of kanom jeen “noodles”. I had to find some in Bangkok!

It was harder than I expected. Bangkokians really love their som thum Thai, what can I say? But finally, on Rachadapisek Road across from the Esplanade shopping center, Saab Wan (or “Yummy Day”, 081-751-3181, parking at the gas station next door), where thum sua (40 baht) is on the menu. 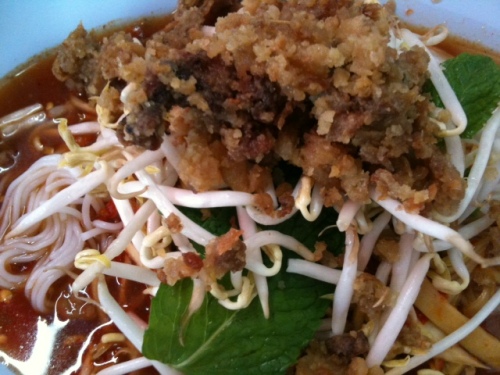 This is a nice melange of crispy bean sprouts and tiny deep-fried fish with the smooth slithery silk of noodles, papaya and bamboo shoots, spiked liberally with chili and pla rah (fermented anchovy). But even more startling is the so-called gai yang (80-150 baht), which turned out like this and, at a glance, explains the rampant popularity of this street food stall: 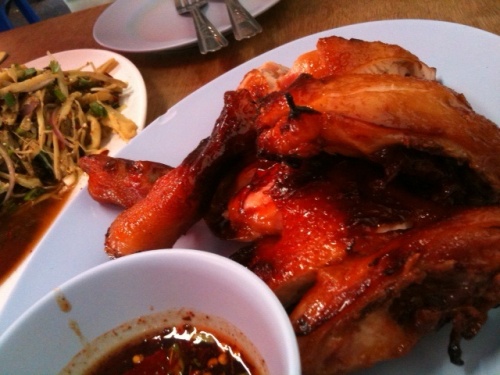 You and I know this is not Isaan-style grilled chicken. This is a lacquered Kim Kardashian of a chicken dish, a bastard child of American barbecue and Chinese sweet pork. This is sugary, sugary stuff — in spite of the fact that Isaan food is not supposed to have any sugar in it. No wonder this stand is packed at all hours of the day! Bangkokians are stuffing their pie holes with the saccharine-sweet oblivion that only sugar can provide.

Of course, this has inspired me to open my own Isaan food stall, using beer-butt chicken instead of gai yang, a grilled corn thum on the side, and maybe a white barbecue sauce alongside the jeao (Isaan-style spicy dipping sauce). Think I’m kidding? Watch this space.

4 responses to “Infatuation with Isaan”