There are few things that people dislike more than whatever makes them feel old. So although Drake seems like a very nice guy with lovely taste in shoes, I have to say that I want to jump out a window every time I hear him on the radio (I would never voluntarily put him on (except for “Hotline Bling” (OK GRANDMA))) because I for the life of me cannot understand why anyone would enjoy listening to that. Does it seem to you that he’s just mumbling over the top of a track laid down by that band that played at your cousin’s bar mitzvah because they offered a 10 percent discount? Mumbling, but without his headphones on, so his words have nothing to do with the beat? Mumbling about his feelings, which you don’t care about, because you have things to do and just want to go about your day? I mean, what are people thinking? Is it just a case of dominos falling, like, oh since that person listens to Drake, I should too? To me, Drake’s music feels like that one friend you have who just will not get off the phone, no matter how many hints you drop about stuff boiling on the stove. Please get a therapist, Drake, who is surely reading this right now. For my own sake.

Something else that makes me feel old: remembering the Sam Yan area as it used to be. There used to be a real wet market there. There were street food vendors and restaurants who were worth the trek from Sukhumvit and driving around the block five times to try to find a parking space. Now, some of them are still there, clinging on by their fingernails to the clientele who have been coming to their shophouses for decades, but not for much longer — Chulalongkorn University, which owns this land, has given notice that the remaining eateries have 3 years to clear out. This makes me sad for two reasons, and those reasons are called Nakorn Pochana and Jok Samyan.

I don’t think there is a Thai person in Bangkok who hasn’t heard of Jok Samyan (245 Chula Soi 11, 02-216-4809), regardless of whether they are a Chinese-style congee fan or not. Jok Samyan is one of the most famous street food vendors in the city, period, up there with Polo Fried Chicken and Thipsamai. Unlike Polo Fried Chicken (which now has an indoor A/C room and delivery service) and Thipsamai (which now has a velvet rope and at least six line cooks), Jok Samyan hasn’t really changed much since when it first started out. They still stir their congee out in front of their shophouse every day, and still make their peppery meatballs (their real claim to fame) by hand before every service.

Thais get all “Zen and the Art of Motorcycle Maintenance” when you ask them what makes a good jok. They will tell you it’s all about “patience”, like they are Axl Rose or Will Smith in that golfing movie with Matt Damon. What they mean is, it’s about how smooth the porridge becomes, and how the rice grains get cooked into a nearly uniform whole. Although Jok Samyan is a street food place, their congee does get that silky, the individual grains broken down for the greater good. Put in a barely-cooked egg and you have one of the greatest street food dishes that Bangkok has to offer. 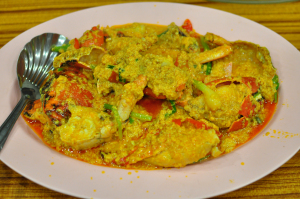 Nakorn Pochana (or “Nai Hai” as regulars like my parents like to call it, 258-260 Chula Soi 11, 02-214-2327) is another eatery that has been in the Chula area for generations. Different people like different things here: for my mom, it’s the wide range of stir-fried greens, always crisp, always fresh,  never bogged down in oil. For my husband, it’s the khao pad nam lieb, or fried rice with Chinese olive, cooked in a claypot and brought to the table fluffy and aromatic with olive and garlic, accompanied by a plate of cubed lime, chilies and slivered shallots. For others, it’s the stir-fried crayfish, cooked until the shells are crispy and crack under the pressure of your thumbs to reveal juicy, sweet tail meat. For me, it’s probably the curry crab, probably my favorite (aside from Raan Pen) in the city. Like beauty, your favorite dish is in the eye of the beholder (or taster). Only the best restaurants can do that.

The reason for this is probably because of the cook, who has been working the woks since he was 19. He is now 53. Nakorn Pochana plans to move to the suburbs within the three-year timeframe, but the chef may not go along for the ride. Oh who am I kidding, the chef is married to the owner, Khun Chariya. All the same, “Thais today do not have the kwam od ton (determination or perseverance) to be good cooks today as they did before,” said Khun Chariya. It’s something only an old person would say.

One response to “Disappearing Thailand”