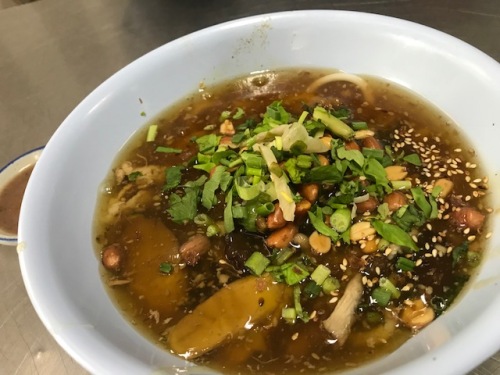 My friend Winner describes himself as “super Chinese”, even though he grew up in California and cheers on terrible American football teams. It’s not the kind of Chinese that my husband is, where they all hang out in Chinatown and burn stuff in the front yard once a year. According to Winner, “super Chinese” means having parents who were forced to go to Chinese school and meeting up at community centers and temples to describe your particular brand of Chinese-ness — in his case, Hainan, which Thais refer to as “Hailum”.

The majority of Thais with Chinese heritage are Teochew, or Chiu Chow. That means a healthy smattering of Teochew restaurants throughout Bangkok, keeping the bak ku teh and oyster omelet faith. But that doesn’t mean there isn’t a healthy slice of eateries out there that aren’t Hainanese. After all, one of the most well-known street food dishes in the country is probably Hainanese chicken rice (khao mun gai), the one-two punch of fork-tender chicken and fatty globules of slick white rice (and clear soup and, let’s face it, the chili-speckled sauce). That’s just one of the dishes that this southernmost Chinese province has to offer. There’s also kanom jeen hailum, or Hainanese rice vermicelli. 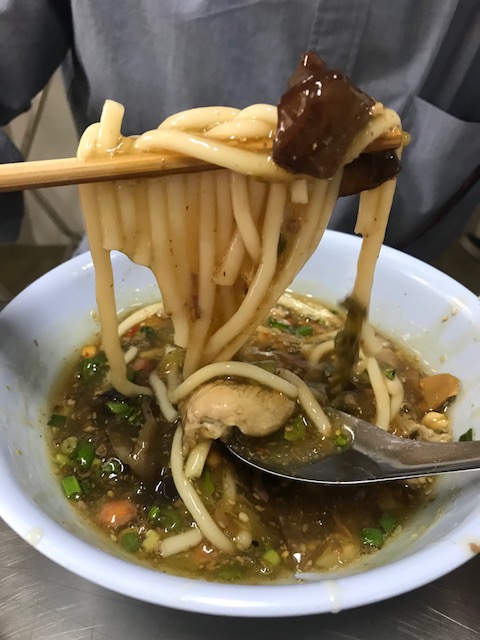 Winner, stopping mid-inhale on a bowl of noodles

One of my favorite things about Thai street food — if not my absolute favorite thing — is the range of dishes available, snatched and twisted into Thai-style shapes from cultures all over the globe. Unlike its chicken rice counterpart, Hainanese rice noodles are one of those dishes that are increasingly hard to find, in spite of itself: a seemingly bewitching mix of thick udon-like strands cosseted in a thickened broth punctuated with shrimp paste, peanuts, sesame seeds, pickled greens and of course coriander and green onion, left to stew into an amiable sludge. And there are the slices of pork too.

There are several places to have this dish, including the pretty obviously-named Kanom Jeen Hai Lum (Charoen Nakorn Road between Sois 17 and 19), which also serves chicken rice, because of course. But another place that places almost all its eggs in the kanom jeen basket is Jay Wa-Jay Yong (463/54-55 Luk Luang Soi 8, open 5-11pm), where the distinctive green bowl of Shell Chuan Chim (Thailand’s answer to the Michelin guide) adorns the shophouse. 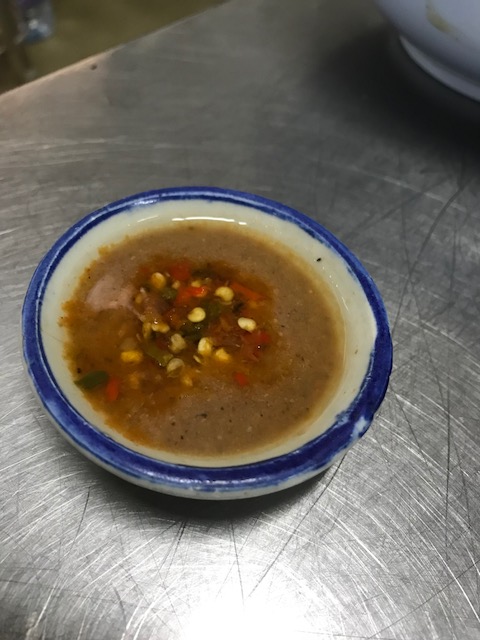 For my money though (even though Winner paid), the best thing at this shophouse is the yum Hailum, or Hainanese spicy salad, cleverly made up of all the things that would garnish a bowl of noodles, but dressed up in the Thai chili-lime-fish sauce dressing that renders everything it touches delicious. A mix of pork slices, moo yaw (steamed pork pate), Chinese mushrooms, lettuce, pickled greens and sesame seeds, this salad has it all: texture, taste, and punch, a dish that can only be found at this dinner spot (so Winner says). They gave me a separate plate so that I could share, but of course there was no need. 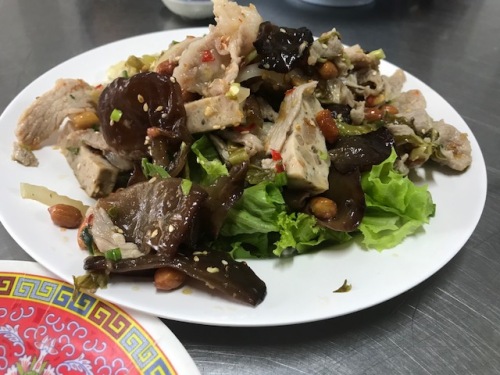 3 responses to “Something for everyone”