Crispy fried shrimp in garlic and scallions — an Uncle favorite

Uncle Sondhi has been my “uncle” for as long as I’ve been married. Like almost all journalists of a certain age in Bangkok, he was briefly my boss; even after I went on to other places, we would still eat at various places together. Almost all of these places were typically of his choosing: you see, not only is he a good eater, he is also a picky one. You will not find him saying, Oh, I guess this will do, and sitting down to some half-assed fried rice at S&P or something. Like my dad, he would rather that every meal counts; if it’s not good enough to count, it won’t be eaten.

He was the first person to show me the goat curry at Roti-Mataba, the first person who forced me to try braised sea cucumber in a Chinese restaurant in New York. But the biggest foodie beneficiary of Uncle’s good graces is quite possibly Oud, a stir-fry cook who makes food out of his home, appears to accept reservations only by referral, and fashions a menu just for you.

Oud in his kitchen deep-frying shrimp

I’ve been to Oud’s house once before, with Uncle, and remember in particular a dish of swiftly stir-fried bean sprouts so deftly cooked that they were still crisp yet full of flavor. He has since moved, but to an area even further from central Bangkok, in the suburb of Bang Kruai. Customers who haven’t been before will need to call K. Oud (086-905-6664) to get directions; every customer will need to find a day (he’ll do either lunch or dinner) when he is available (not surprisingly, since it’s his house, space is limited). When we called, we actually had to drop Uncle’s name, because we weren’t sure if we were going to even score a table.  Once we did, though, it was smooth sailing, because Uncle is quite possibly Oud’s #1 customer.

Naturally, once we dropped Uncle’s name, we got Uncle’s menu, which is big in seafood: a big deep-fried pomfret with a spicy-sour-sweet “3 flavor” sauce; deep-fried shrimp in garlic; fried chunks of fresh seabass with chilies; stir-fried clams and Chinese kale in oyster sauce. Uncle can’t have lime and usually goes for a plain clear soup (gang jued)  but we asked for a big vat of tom yum shrimp and stir-fried crab in curry sauce, because I love that dish. If you don’t want to go by Uncle’s menu, you can choose whatever you like, within reason. The decisions are made via a committee of you and him and whatever is in the market that day.

Once you find your way to Oud’s neighborhood, you will still need to ask for directions from the security guard. He’s used to that though. Even once you find his soi, you will need to keep on the lookout for the sign above, the only thing marking his home as different from the others.

Once you enter, though (after having shed your shoes because it’s a home after all, hello) the feel is like that of an intimate kappo bar in Japan. I love Japanese kappo — chef’s bars with limited seats where the husbands cook and the wives try to make you as comfortable as possible, plying you with sake all the while. The set-up at Oud’s is similar, the single table with a window overlooking the back kitchen area when Oud is hard at work.

I get the feeling, though, that unlike at a traditional kappo, he would prefer you not traipse all the way back into the kitchen and obsess over his every move. Oud is an introverted type of cook, quiet and tidy, looking a bit like he could be an older model in a Muji catalogue. His food is similar in temperament, not flashy or showy but of very good quality. It’s the kind of deceptive Thai-Chinese comfort food that anyone feels like they could cook if given the time; it’s the food equivalent of the Jackson Pollock or late-stage Matisse that would prompt the nearest douchebro dragged to the gallery by his girlfriend to exclaim that his 3-year-old nephew could do it for nothing. I will tell you now: Don’t do this yourself. Also, your nephew will not be able to stir-fry you any seabass with chilies. Don’t try to make him. 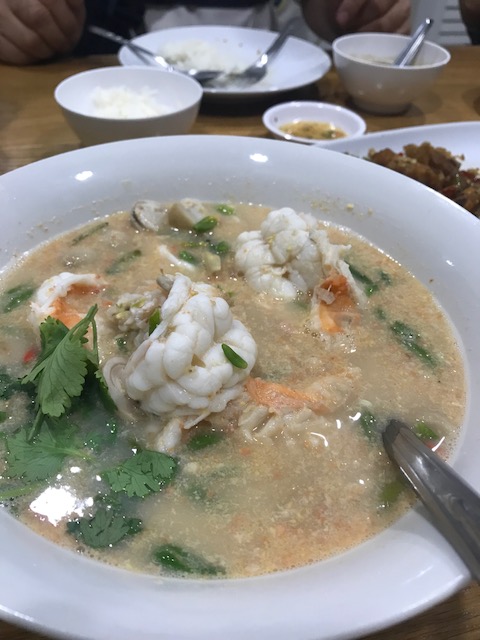 Tom yum goong, the broth made creamy by scraping out the inside of the prawn heads

There are a lot of exclusive places in Bangkok, and a lot of expensive places in Bangkok, and places that check both boxes (exclusive and expensive, in case you were wondering). But of all the places I have been, none feel as intimate — outside of a friend’s house — as Raan Oud, where the chef and hostess are there exclusively for you, for as long as the duration of the meal. For five people, the bill came out to a little over 5,000 baht; for a minimum of 10,000 baht (invite all your friends!), Oud will come to your house to cook. I am already thinking about doing it myself.

Seabass with chilies and garlic

One response to “Bangkok’s secret kappo”