Glutton Abroad: The Case of the Missing Appetite

It was like a body, dressed haphazardly in formalwear, glasses askew and smeared lipstick on a too-young face, discovered behind a couch in the library. It was a purple-faced vicar collapsing to the ground in convulsions in the middle of a cocktail party. It was a reviled industrialist with a mean streak, found murdered in a locked bedroom.

It was my appetite.

Now, my appetite had its share of enemies. It had cut many a mighty swathe through even the most intimidating of restaurant tables, guest house countertops groaning under the weight of myriad dishes, cows mooing in the fields, etc. But the facts are irrefutable, and they are this:

The famous bone marrow with a parsley-caper relish at St. John

There is no denying the impact that nose-to-tail pioneer St. John has had on the global restaurant scene. Indeed, there was a period of time when no restaurant could open without claiming to be a “nose-to-tail” specialist, all the while serving only oxtail stew and a token pig’s ear or tail terrine of some sort (but I digress). St. John was the first to make that philosophy paradoxically glamorous, and I have been a fan of chef Fergus Henderson for years (I even have the cookbook). I had wanted to go for as long as I can remember.

Knowing this, I tried as best as I can to wake up my appetite for this momentous event by having only a coffee for breakfast. So I thought it was well-equipped to take on the kohlrabi salad, mustardy pig’s tongue with green beans and pickled shallots, half of my daughter’s sweetbreads and a taste of my husband’s roasted marrow — normally a walk in St. James Park for this creature, aka my appetite. And even though everything was perfect, seasoned just the way I like it, and served with the good humor and aplomb that only the best places can muster, I still felt like a lead weight had invaded my insides after about an hour, and was forced to miss the mummies at the British Museum in favor of sleeping it all off back at my hotel room. Later, I caught a performance of “The Lehman Trilogy” at the Piccadilly Theater (full disclosure: I am a 0.0000000001 percent investor), which means I had only one meal that day. What happened???????????

Since skipping breakfast didn’t work, why not just get a good meal out of the way? Truth be told, The Wolsley was not my choice, but my husband’s, who wanted to have what he said were the best scones in the world. Alas, we are Asian, so we did not know that scones are not served for breakfast. Luckily, The Wolsley has a great breakfast: there are deviled kidneys, and kedgeree, and kippers, none of which I ordered. This is because there was a bacon sandwich on the menu. I also got a Chelsea bun because I didn’t know what it was. It turns out that it is like a cinnamon bun without the cinnamon.

According to The Wolsley’s website, it is the most profitable restaurant in London, and I am pretty sure I know why. Upon entrance to the dining room, you are stopped by a maitre’d, who at a moment’s notice assesses your person to determine where you should sit in the dining room. It turns out that The Wolsley’s maitre’d is not an avid reader of Bangkok Glutton. We were dispatched to an upstairs Siberia, where I actually enjoyed a great view of the entire dining room and how this informal hierarchy gets arranged (the most coveted tables appear to be directly in the middle, which doesn’t make sense to me since there’s no good vantage point for spying on other people). Service was similarly condescending, adept at giving you the feeling you are being well tolerated. The result? I want to go to The Wolsley every day for breakfast (but only if I get the same table every time.)

I don’t think any food lover goes to London without some intention of hitting up some South Asian goodness. London is a hotbed of great Indian and Pakistani restaurants, and all I had to do was pick one. My friend Gareth said that he was confounded as to why I would trek all the way out to Whitechapel when Dishoom was right there, but then again he’s not as crazy about Indian food as I. Because the fact of the matter is, Tayyabs is one of the most famous Indian restaurants in London for a reason.

Tayyabs specializes in Punjabi food, but is crowded with people of all stripes at just about any time of the day. I want to say that taking the trouble of booking a table in advance was useful, but I’m not really sure if they cared. They will simply stick you anywhere you will fit, Thai street food-style.

There are a few dishes that everybody orders: the tarka dal, chicken tikka masala (the General Tso’s chicken of the British Indian food world), the tandoori chicken. Everything is a bit more fiery, less creamy and rich than the Indian food you get in Bangkok. But the standouts are the lamb chops, which are really out of this world, intense enough to make me momentarily forget about my missing appetite troubles. 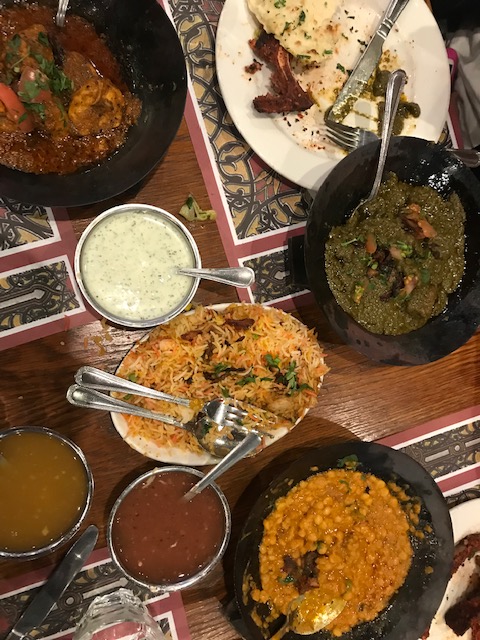 Folks, if you ever find yourself in London and for some reason or other are in search of a Thai person, have no fear: you will find that Thai person at New Fortune Cookie in Queensway. Make sure you come during the first lunch shift, because after 1pm the dining rooms will be taken up by actual Chinese people.

The food here is excellent. I can’t say if it’s the best roast duck in London, but it’s got to be one of the best. And I’m not saying that because, even though we stayed only a few steps away from Chinatown, we never braved the queue at Four Seasons. Why would we do that, when we can just traipse into New Fortune Cookie at noon (after one quick Tube ride, or almost-as-quick bus ride) and get a table immediately? 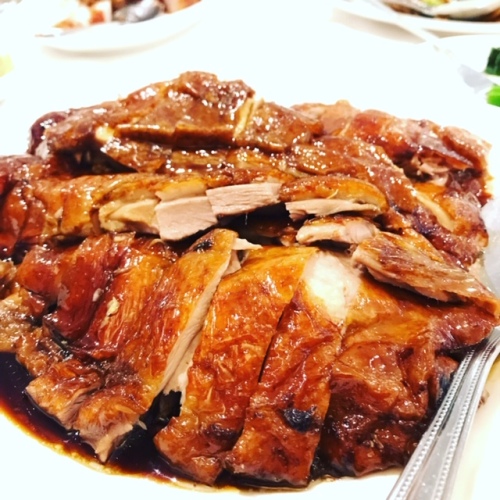 Don’t worry, we overordered, and people had to take leftovers home after lunch. And don’t worry, I wanted to die after eating. But I promise you that not a shred of that duck was left (and, protip, you can also order it with all the bones already taken out).