Deep-fried pork belly and curry on rice at Mae Awn

Nearly every Thai food lover I know professes a deep affinity for Thailand’s street food. Never mind that it is frequently infuriating, with its occasional long waits, its heat and smoke, its intermittent inconsistencies. It’s the grime, the capricious grumps who serve as owners, the odd feral cat or two that turn street food from a sweaty, hurried interval spent pouring rice down your facehole into a quick “immersion in the Thai culture”, set in romantic, picturesque squalor.

I’m not saying the pursuit of street food is an exercise in culinary Orientalism — unless you think the locals are guilty of doing this too. Because, as much as some people think the fetishization of street food equals a food-centric depiction of the so-called “Noble Savage”, the truth is still very simple: much of Thailand’s best food is still on the street, and those plastic stools and dingy shophouses are still dominated by Thais. Thais love good Thai food. Visiting Thai food lovers want to eat what Thais eat. It is as easy as that.

Nothing quite captures the freewheeling, exuberant quality of Thai street food quite like khao gaeng (or khao gub gaeng, or khao raad gaeng, all of which mean “curry on rice”). These streetside “buffets” are actually excuses for people to act like frigging maniacs aka Lindsay Lohan in a jewelry store — a free-for-all where the ultimate reward is a pleasantly full tummy. A tableful of curries awaits; you pick up a plate of rice and choose anywhere from one to three curries … or more if your vendor is willing.

My friend Winner, who — despite his curious allegiance to the 49ers — knows Banglamphu street food better than anyone I know, is a huge fan of khao gaeng. His favorite: Raan Khao Gaeng Mae Awn, moored in the shadow of Saphan Lek and kitty-corner to the Mega Plaza. Its sign looks like this:

Despite winning plaudits from various lady-cenric morning shows, this stall still retains its street cred — a credibly crabby lady doling out rice and curries, a handful of tables with plastic stools and a layer of grease, and the requisite crowd keen to jab you in the ear with their elbows as they pass by. Why Winner likes it: the superiority of their thom jeud (clear soup, because no Thai eats rice without some kind of soup), the popularity of its moo kem (deep-fried pork belly) and the sheer diversity of their daily offerings. 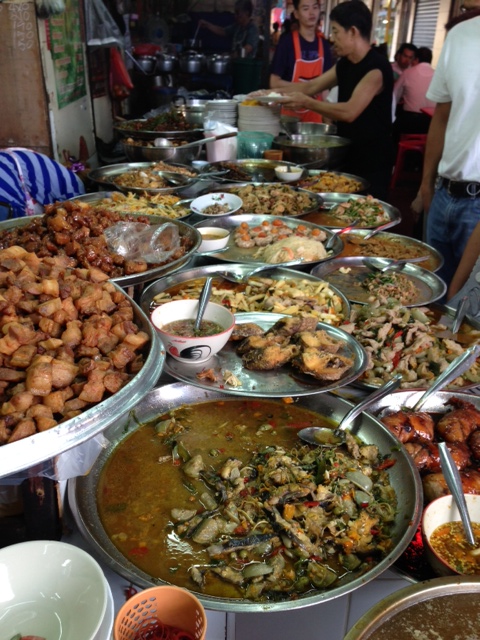 A (sort of) moveable feast

It’s a curry (and stir-fry, and deep-fried tidbits) bar, quite possibly the best kind. But no need to skulk off to Banglamphu to get some good curry action; there is an array of rice toppings (of varying sizes) at nearly every major intersection and street corner in the city. The one I frequent is next to Benjasiri Park, behind Emporium, while next to Emporium on Sukhumvit, a mammoth curry rice stand doles out food on Sundays. Find your own favorite.

The holiday season is fast approaching, and with it — fingers crossed — the end of the “research period” (aka eating my weight in street food) for my book. Isaan is now firmly in the rearview mirror, and Sukhothai awaits. And Bangkok … well, that’s still around, too, stubbornly defying all my efforts to check it off my “to do” list.

Amid all the som tum, grilled chicken, and crunchalicious deep-fried morsels of tilapia wrapped in betel leaves and garnished with bits of lime, chili and ginger was a special stall in the middle of the disarmingly clean “Tessaban 1” market in downtown Udon Thani. Across from a stand selling out-of-this-world yummy Isaan sausage, moo yaw (a Vietnamese-style pork “pate”) and Chinese sausage was a mustachioed slim man with an Asian Jack Sparrow look to him. On offer: khao piek, which translates to “wet rice” but actually refers to giem ee (fat, short rice noodles) served in the liquid leftover from cooking rice (hence its glutinous, opaque quality) and crowned with a slice of moo yaw and a brief shower of chopped green onion. This is the ultimate in comfort food: nursery-like, tasting and smelling of chicken, yet still springy and gummy in all the right places.

The vendor, Lung Nuad (which translates to “Uncle Mustache”), also serves gaeng sen (glass vermicelli in a pork bone-based broth thick with bits of pig). Both bowls cost 20-30 baht, depending on the size, and can be seasoned with fish sauce, white pepper, chili oil, sugar, chili-flecked vinegar, or chili powder. Mornings only, and perfect for when the kai kata (egg in a pan) vendor nearby is just too busy to see to your breakfast needs.

Uncle Mustache at his station

Pretty in its own way

Growing up in a small Pennsylvania town 15 minutes from the Ohio border had its good points and bad points. Good points: a safe place where you could build forts in the woods and ride bikes with your friends all day long; living a short walk away from the school and park; great Italian-American food, Indian food, and Middle-Eastern food. Bad points: I was Asian. Not the only Asian, mind you — I was the Asian Girl. My friend KK who was also in my grade was the Asian Boy. Classmates would come up to me (and probably him) from time to time to ask “Why don’t you go out with KK? It would be SOOO perfect” like the world had rained for 40 days and nights and they were in charge of building some sort of Noah’s Ark with Asian people.

This sounds small, but it wasn’t. I was never a viable person that anyone in their right mind would ever consider going out with (and by “going out”, as this was 7th grade, I mean asking your mom to drive you to the Christmas dance in the junior high cafeteria while I wear a Talbots dress borrowed from my mom). I would never get to wear my “boyfriend’s” football jersey on Fridays before the game. I would never get to go to high school parties on the weekends. (I did, however, get to watch a lot of foreign films over sleepovers and play a lot of Dungeons & Dragons, things that have actually helped me a bit later on in life).

I used to be sad that I wasn’t an Erin or an Amy or, best of all, a Jennifer. Instead, I was a Chawadee (aka Dog Chow aka Chow Time aka Choo Choo aka Chewbacca). But later, as I grew older, friends would tell me I was “pretty in my own way”. That could be bad, like “you are pretty in a way that no one recognizes”, but it could also be good, like “you are uniquely you”. Looking back, I choose to read it in the good way. I am me.

Guay jab — that Thai-Chinese street food dish featuring curled-up flat rice noodles, random bits of pork and either a thick soy sauce gravy (nam khon) or clear soup (nam sai) — might be considered “pretty in its own way”. It’s the least glamorous of all the noodle soups: the silky, savory voluptuousness of a bamee (egg noodles), the easy-to-eat immediacy of a guay thiew moo (pork noodles), the eager-to-please popularity of a guay thiew tom yum (noodles in spicy lemongrass broth). By comparison, guay jab is too challenging, too hefty, too porky — bits of lung, intestine and pig skin mingling with tenderly poached slivers of meat, noodles and, in the case of the thick broth, half a boiled egg. There is no mitigating flourish of lettuce, no handful of palate-cleansing greens. It’s Piggy with a capital P. What are you gonna do about it?

There are people who see guay jab for what it is — a celebration of the pig — and like it in their own ways. For the thick-bodied version, look no further than the stand on Sukhumvit Soi 38, the first stall on the left as you enter. Those who like it more in the Chinese style should go to Yaowaraj Road, where the clear, peppery version awaits at Guay Jab Oun Pochana. Either way you like it, you can’t go wrong.