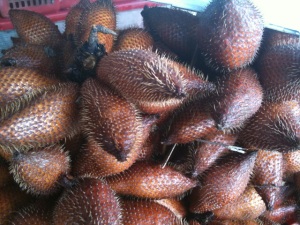 “So, what’s the regional specialty?” I ask as we zip eastward through a smattering of rice fields and a succession of rolling hills. I have never been to Chantaburi, close to the Cambodia border and hugging the Gulf of Thailand coastline, aware only that it is famous for its sapphires. I have sacrificed much already on this 3-hour car ride, uncharacteristically agreeing  to bypass an “Indian fast food” stall at a highway rest stop somewhere back around Pattaya, and I am starving.

“Noodles,” my husband says. “And … ” No. He doesn’t know much about Chantaburi either.

This trip had been a spur-of-the-moment decision, an attempt to reconnect after six months of newborn baby-wrangling. Well, it ended up becoming an attempt to reconnect after I forgot to download the last season of “Entourage” and my husband’s phone service sputtered out somewhere past Klaeng. Left to our own devices, we manage to get lost only twice, thankfully checking into our hotel as dinner service starts.

Located on Kung Vimarn Beach, part of a crescent of land encircling Ao Krabane (or “Stingray Bay”), Al Medina Beach House (www.almedinabeach.com) is the quirkiest hotel in an area full of little oddities. This “Moroccan-inspired seaside hideaway” has nine rooms, each named after a different Moroccan city and decorated to evoke the varying “moods” each city represents. Our room: Marrakech, one of the bigger rooms in the hotel and located in a sun-filled corner of the house.

The feeling is … secluded, to say the least. Evoking “Casablanca”-meets-“Castaway”, Al Medina brings to mind the clutch of high-end resorts popping up in Northeastern Thailand — where the local tourist industry ends up fabricating diversions to attract tourists and the hotels become the destinations in themselves, rather than the other way around. The tourist attractions close by, from the “eco-farm” to the aquarium, have a very makeshift feel to them, like they have just opened and are still relatively untested. Some, like the “turtle nursery” and “shrimp fishery”, don’t exist at all. It doesn’t help that the main attraction — the beach — is off limits during the low season. 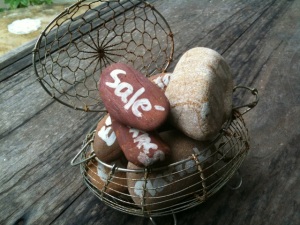 A collection of stones painted with the names of each room

That’s not to say there’s nothing to explore at Al Medina. The owners have clearly poured their hearts into it, hand-selecting each piece of furniture and even including a vintage clothing shop on the mezzanine floor (I’ll admit it; I made off with two dresses). Service cheerfully accommodates any request, from the simple (a wine-opener) to the unreasonable (full dinner service painstakingly carried up to our second-floor balcony). Food ranges from the better-left-in-the-kitchen (eggs benedict) to really good (morning glory, or pak boong, stir-fried sator-style with gapi and shrimp). And the rooms are great fun to look at; our favorites are Marrakech (of course), Casablanca (with its rooftop garden) and Essaouira (as big and sunny as Marrakech, but on the first floor).

That said, my husband and I have been married for 13 years. How much time are we going to waste in the hotel, really?

Especially since Chantaburi is chock-a-block with natural bounty: the sala, the pitted fruit with the smell that reminds me of bad breath or two-day-old garbage; beautiful prickly red ngo; and, even now at this time of year, durian, the king of fruits. We only find mon thong (“golden pillow”), popular for its meatiness, but connoisseurs are fond of gan yao (“long stem”), smaller but creamier, and still others like chanee (“monkey”), which is wonderfully messy and falls apart at the slightest tap. 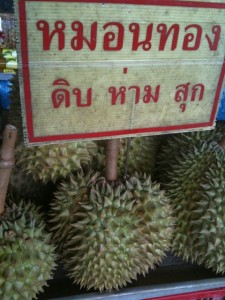 And then there’s the food. Chantaburi is particularly reknowned for its sen chan, or “Chantaburi noodles”, said to be chewier and heftier than regular rice noodles. It is also known for its regional sweet tooth. In a country full of sugar-holics, that seems like a particularly hard-won distinction.

To test this out, we head to Ruen Rim Nam (Klongthasang Pier, 089-541-4841), among the more well-regarded restaurants in the area, dotted liberally with pictures of former Prime Minister Samak Sundaravej trying his hand at a stir-fry in the restaurant’s kitchen. Now, regardless of what you think about his legacy, Samak was always considered an important booster for the local food industry and placed great importance on Thai food himself (indeed, he got kicked out of office because of his food show). I am reassured by his pictures and settle in for a good Thai meal. 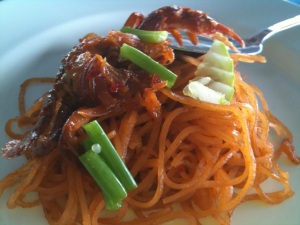 First, the sen chan: served local-style, fried with tamarind juice and garnished with cucumber, scallions and local soft-shell crabs. It is like pad thai … but without the textural contrast, spice or tartness. In short, it’s just sweet, with crab so sugary it could qualify as “candied”.

Everything else plays that “halfway there” game with our tastebuds too. Spicy lemongrass tom yum, broth replaced by an egg custard, seems interesting in theory, but is thoroughly defanged by the creamy blandness of the steamed egg. Nam prik pu kai, similar to the “crab egg pounded chili dip” of the rest of the Central region, includes crab meat and is pounded to a silky uniformity, making it hot and toothless at the same time.

The best dish ends up being pla lai jai, or “fish of many moods” — a whole grouper deep-fried, one side served “sweet-and-sour-style”, the other plain with a sour mango relish. Simple, yet still flourishy and flamboyant, because that’s just the way Chantaburi is. Who am I to say there’s something wrong with that?

It’s easy to say it is the restaurant’s fault, but it’s not. Ruen Rim Nam is an excellent Chantaburi-style restaurant, typical of the region but with above-average food quality and service. Go and try it out for yourself. Don’t let the grumblings of us olds (“So much sugar! I’m getting nauseated! My hip hurts!”) ruin it for you. You just might like it.

As for us, we spend our next night at the hotel, with four steamed crabs and a bottle of wine for company.

2 responses to “Gluttony in Chantaburi”