The Ugly Face of Chauvinism

I have inexplicably agreed to be on a panel at the Foreign Correspondents’ Club of Thailand to discuss foreigners cooking Thai food. While I am happy to do it, I am also a little apprehensive. This is the grad student who had to give her presentations sitting down in order to keep from passing out or vomiting. This is the friend who hates talking on the phone because that form of communication is too immediate and invasive. This is one of your speakers, guys! Hopefully I have moved beyond panic attacks and am now at peace with being a gibbering idiot.

Another reason I’m worried? Because I am a great big hypocrite.

Let me explain. I have been writing a street food guide for the past year, a project I have been super-quiet about because I don’t want to jinx it (yes, I am that type of person). It’s called “Bangkok’s Top 50 Street Food Stalls” and it will be out early next year (knock on wood. Fingers crossed. Turn around three times).  In it, I detail different types of stalls — yummy duck porridge; buoyant oyster omelettes; exuberant iced coconut milk desserts; extravangantly stuffed flat noodles.

And not a mention of a northern Thai noodle dish, anywhere.

I know what I’ve done. I know there is ample khao soy and kanom jeen nam ngiew to be had on the city’s streets. Believe me, given my issues with northern Thai food I have tried almost all of them. But I feel like 1.) the best ones are branches of Northern Thai institutions, so why not go to the real one, and 2.) there are so many other great stalls out there. Really, though, there is no excuse. I am guilty of culinary chauvinism. I don’t want to believe Bangkokians can make a decent bowl of khao soy, much less approach the personal Freudian nightmare that is nam ngiew.

And, I am sorry to say, this is not my only prejudice. As long as I’m laying it all out there: watching the movie “Invincible”, I was struck by how Mark Wahlberg (who plays an Eagle) had a girlfriend (Elizabeth Banks) who was a Giants fan. Uh, WTF?! Because there is no, no, never, ever, never any way I would go within two feet of a Cleveland Browns fan. Sure, some of them may be nice and all, but to date or even marry one? Are you kidding me? (This from the person who still cannot show her face at Bully’s because she almost got into a fist fight with a Cardinals fan two years ago. He was almost 50! I could have taken him).

People tell me about close friends, open-minded in every other way, who turn into Asia’s answers to Glenn Beck when it comes to the issue of foreigners cooking Thai food. It can’t be done: farang lack the upbringing, the tastebud training, the turbo-charged metabolisms, the innate love of the color fuchsia.  We laugh at this, but I’m the same. I have my blind spots too.

So I want to make amends before I go on this panel. Here are the Northern Thai places I go to in Bangkok when I know I won’t be going up North for a while: 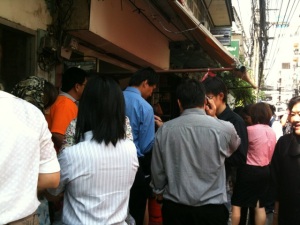 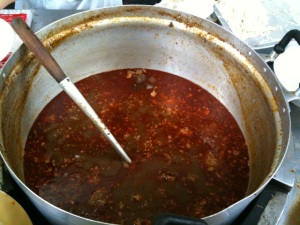 You know what this is

Nam Ngiew Pa Suk (Soi Phiphat, 300 m from Silom, on the right side)

Not surprisingly, this is the branch of the venerable stall in Chiang Rai. It also serves khao soy (which I find kind of bland) and khao ganjin, or what my friend calls “crazy purple Shan rice”: rice steamed in pork blood and garnished with deep-fried garlic and fresh coriander. But the nam ngiew is almost as thick, rich and meaty as the original, and very popular, unlike many other Bangkok stalls where it’s the nam ngiew that is neglected in favor of the more well-known egg noodle dish.

This is a good Northern Thai restaurant overall. They do everything well here: super nam prik num (roasted green pepper dip), nice gaeng ho (a sort of “goulash” of leftovers including glass vermicelli noodles and pork), and yes, a good khao soy. The nam ngiew is sort of unusual here — a thick fermented bean base that has a deep undertow of near-fishiness. I love it. A shame it’s so far away. 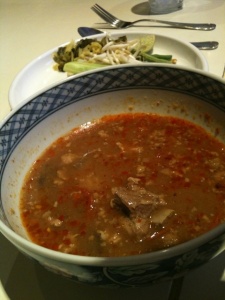 So there. Two places I go to again and again. And not in the hopes I find something to complain about, either. I would have tried for three, but let’s not push it.

Have a good weekend. Unless you are a Baltimore Ravens fan.

7 responses to “The Ugly Face of Chauvinism”