Eating in the Year of the Rabbit

Every Chinese New Year, I look forward to coming to Yaowaraj, or what Thais call their Chinatown. I am not of Chinese descent, so every little ritual —  the burning of mini-replicas of cars and money, the praying to the ancestors, the giving and receiving of tiny little envelopes — holds a particular fascination for me. How did I go through my 70+ years without ringing in the year of the dragon or tiger or pig? How could I have missed out on those years of silky noodles, wobbling pork legs, glistening oranges? 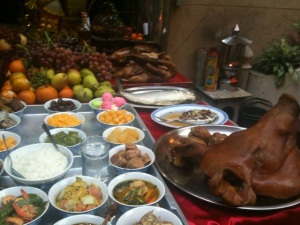 So at the crack of dawn we bundle up and make our way down to Chinatown in the hopes of reconnecting with other family members and paying homage to Tan Jiao Sua, the ancestor of my husband’s particular branch of the Bunnag family, descended from Somdet Chao Phraya Pichaiyat. The Bunnags are a very large family with a gigantimongous number of branches, but all historical accounts point to Persian merchant Sheikh Ahmad, who moved to then-Siam in the 17th century, as the first Bunnag ancestor.

Now, the various branches are designated by where they come from: there are Thonburi Bunnags, Ayutthaya Bunnags and Chinatown Bunnags, descended from  Tan Jiao Sua, a former bottle seller in Chinatown who made his fortune after siding with the government during the Chinese uprising. He eventually saw his only daughter married to a Bunnag, and the Pichaiyat branch was born. At the height of their wealth, this family’s holdings included half of Yaowaraj; today, the “company” is all that is left.

But while the history is interesting, what really brings me here is the prospect of stuffing my face. Every year, at the “company” — what my husband’s family  members call their building in Yaowaraj — stands are set up offering oyster omelettes, chicken noodles, Chinese-style rice porridge and braised fatty pork leg. Later in the day, the family elders throw fist-sized gold coins into the air, sending all us “young” people scrambling, abandoning all pretense at dignity as we elbow three-year-olds out of the way to our booty. Later, as those crybabies weep into their baby formula, we gloat and hoot and let the heavy, shiny coins slide through our fingers, counting as we go.

I might be kidding about the last part. Really I am looking forward to the food. But this year, we arrive too early to get at the stands and their bounty. Instead, we are met by a bitter, harassed cleaning lady who says she is working all alone and needs help to get everything ready. So we do what any responsible adult would do and run far away, hiding in the second-floor cafe where we gorge on buttered, white toast and sausage of indeterminate origin, squealing at the occasional cockroach.

Later we go home before most of the family members arrive and are met with a welcome sight: the kind delivery of a vat of braised fatty pork leg, some bowls of clear bamboo shoot soup, and rice. So that is what we have, thinking that the Year of the Rabbit, so far, isn’t so bad after all.

4 responses to “Eating in the Year of the Rabbit”