Will it cut the mustard?

This is not to be confused with cutting the cheese — because of course I will cut the cheese. No, “cutting the mustard” is an old saying that implies something has passed muster, is deemed acceptable. The question here, as always on this blog, refers to food — the future children of my pots and pans.

I am going to be embarking on a cooking challenge, aided by inner voices supplied by Chef McDang and my aunt and Win’s grandmother and whomever else has written a Thai food recipe. I do this because, while I am a competent cook of English roasts and Italian pastas and French, uh, fries, frozen from the bag, I have never put my hand to a real Thai food recipe, not even once. And that bothers me.

That also places me in the realm of the “average-mediocre” in terms of cookery skill here; it won’t be as alienating as reading a cookbook by, say, Thomas Keller, but (hopefully) I won’t be a complete doodoohead either — I do know the difference between a beurre manie and a roux. Which won’t help me much in this case. Yet however.

There is also a post-Songkran bounty of recipes in my house, right at this moment. Win’s grandmother has two restaurant menus-full of them, laced with the Persian-Chinese-Thai influences that run though my husband’s family, who gather in Hua Hin every Thai new year to gorge on khao na gai (rice topped with chicken gravy) and khao buri, or “cigarette rice”, similar to the Thai-Muslim standard khao mok gai except more herbal. 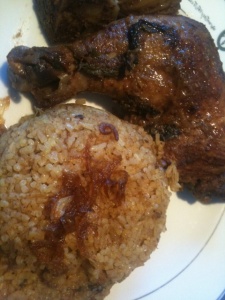 I won’t start with that stuff though. That stuff is too hard.

So why not? It’s not like there is furious demand for my writing services. Somehow editors aren’t peeing themselves in ecstasy over my story ideas about exploring the little-known cuisine of the super-secret community of western Pennsylvanians in Bangkok (cheesy fries on cheese toast, with cheese) or an expose on noodle stalls helmed by cooks born to Cordon Bleu-trained pastry chefs moonlighting as doctors/lawyers/prime ministers on Thonglor. Somehow this gig isn’t working out for me right now. I have plenty of time.

But do I have the mustard? (For the record, I know I don’t need mustard to cook Thai food. At least I know that. I need ketchup).

7 responses to “Will it cut the mustard?”