When I order steak tartare at French restaurants, I am invariably told by a worried waiter that the dish I have just asked for is raw. Do I want to rethink my order a little bit?

Raw is, in fact, what I’m looking for. There is that feeling of being an animal, of tearing into something in its “natural” state, untouched by flame, uncivilized. I don’t think I’m the only one. Thanks to the rise of the Japanese sushi bar, tartare of some form — beef, tuna or salmon — is a fixture of pretty much any Western restaurant across the globe: studded with avocado, dusted with pink peppercorns, or, if you are particularly unlucky, bulked up with ketchup.

Since tartare is pretty much ubiquitous, other types of restaurants have had less trouble serving raw meat to diners previously considered “too skittish” for such savage fare. Nadimo’s features a “raw kibbee” dish that is made up of minced lamb cut with bulgur wheat and accompanied by a garlicky puree. It’s unusual and surprisingly delicious, an example of how good raw meat can be. 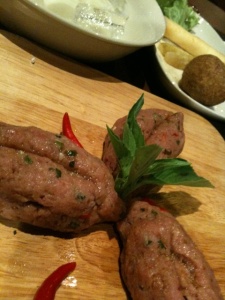 Thai food boasts its own raw dishes — in this case, larb dib nuea, or “raw minced beef salad”. Its nature changes depending on the region; in Isaan, it’s tart and fresh, leavened with ground rice grains and lots of pak chee farang, the sawtooth-edged leaf reminiscent of soap. In the North, it’s something brusque and brawny, with lots of dried chili, a hint of pork blood and a shrimp paste-based sauce. The Northern Thai one is the version I’m trying today. 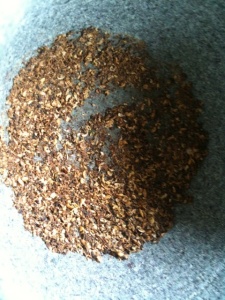 Directions:
1. After having grilled most larb paste ingredients on an oven on full whack, pound into a paste with mortar and pestle alongside lemongrass and roasted makwaen or other substitute. 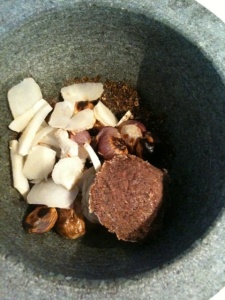 3. This is optional, but you can cook your larb dib bleu by adding vegetable oil and giving the meat a few stirs with a wooden spoon. Otherwise, you can leave the lovely deep ruby color by leaving it completely raw.

4. Season with salt and fish sauce to your taste. Top with sliced shallots, fried garlic, fried sliced lemongrass and shredded coriander. I also topped mine with lots of mint, even though it’s more Isaan and less muang (Northern), simply because it’s one of the few things we have managed to grow in our garden! Look at these beauties (I know it just looks like regular mint to you):

5. Serve accompanied by sturdy lettuce leaves, cucumber slices, blanched green beans, boiled pumpkin and any other fresh vegetable you may fancy or have lurking somewhere in your refrigerator. Don’t forget the sticky rice.