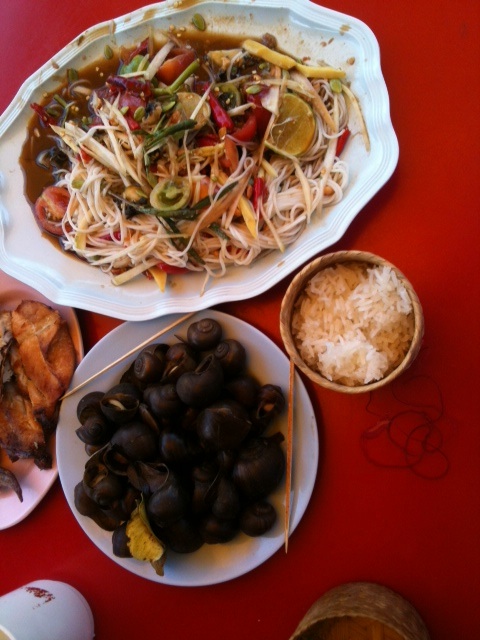 It’s 10 in the morning, and I am already stuffed. I cannot imagine what lunch holds in store for us.

Yes, I am starting this all over again. The first book, researched while I was pregnant with my second child, gave me … well, the joy of publishing my first solo effort, and 25 extra kilos. This second, well, who knows? I certainly don’t want 25 extra kilos, and I’m not sure if I could do it, even if I wanted to. My digestive system is screaming, What are you thinking?! even as I lurch my way through downtown Udon Thani. And this is only the beginning.

After landing in Udon Thani, our gracious hosts promptly whisk us off to VT Nam Nueng (www.vtnamnueng1997.com), a Vietnamese restaurant that, well into its second generation, is just about as big as any enterprise can get in Udon Thani. Every day, an assembly line churns out thousands of sticks of nam nueng (pork sausage wrapped in a flat rice noodle, lettuce and herbs and drizzled with a sweet-tart dipping sauce) and goong pan aui (shrimp mince wrapped around a sugarcane stick), later to be sold at either the restaurant, replete with air-conditioning and imposing Chinese-style furniture, or at the aggressively efficient take-out counter. There is even a hotline, where a motorcycle awaits your call should any nam nueng emergency arise. Not to mention the branches at the airport, or the various other Vietnamese-Thai restaurant chains in town, helmed by cousins or children of the original VT founder, who made his dipping sauces in a secret room so as to minimize infighting among his children.

But Udon Thani isn’t all about Vietnamese food (though it does boast a sizable Vietnamese community, said to have fled the country during the French colonial era). Newcomers to the city jonesing for street food but unsure of where exactly to go should simply get themselves to Naresuan Road, which appears to be Street Food Central for the entire town. Here, you will get anything you could possibly want: toothsome Chinese-style rice porridge (jok) as well as the looser Thai kind (khao thom), boiled with pork cartilage to a porky mellowness; hunks of muu satay, pork slathered in coconut milk and grilled on bamboo skewers; winningly large portions of silky, golden, whisper-soft homemade egg noodles — what it must feel like to eat Jennifer Aniston’s hair, if her hair was delicious.

But the standout, for me, has to be the Isaan food — fiery, acidic, deep with the bass note of the fishy and fermented, without any fancy-fingers gimmickry or sugar. At Jay Gai Som Tum, you have to pick up a number and wait in line for a gander at one of the maestro’s artfully pounded concoctions: thum pa, a jimble-jamble of fermented rice noodles, some slivered green papaya, boiled snails, green pak grachet and bamboo shoots, perhaps? Maybe a thum lao, green papaya mixed with the bewitching brew of fermented Thai anchovies (pla rah) and pickled field crabs, or thum mamuang, julienned mango topped with tiny field shrimp and flavored with the juices of an especially large mashed field crab. Or maybe you’re a traditionalist and want to stick with thum Thai, in which case — why are you here again? The point is, there’s a lot of different kinds of som tum, from the traditional green papaya version to mango, to gratawn (the sweet-tart santol) to the rice noodle, or kanom jeen-based som tums that appear to be the default setting for the som tums here  — Thai fusion in action, a Central Thai ingredient getting the Isaan treatment.

What perfectly sets off all that fire and acidity? A simply prepared bowl of snails, a mere 10 baht per dish, boiled with kaffir lime leaves.

Udon Thani is a great town that I must visit again, but I had to venture up to Khon Kaen, today one of Thailand’s biggest, fastest-growing cities. So we girded our stomach linings and made a special effort to go to Saeb Nua (Mitraphab Road across from Srinakarin Hospital), which ended up not being street food but special nonetheless, despite its factory cafeteria ambiance. Another long menu of som tums here, as well as delicious larbs (minced meat salads, including larb goy, or raw beef larb) and nam toks (grilled, rare meats in a spicy dressing). But the stars here are the gai yang, or whole chicken, pressed flat within the recesses of a wooden stick and grilled, and pla pow, freshwater fish encrusted in salt, stuffed with an herb parcel and also grilled. There is a lot of grilling in Isaan food.

At night, a meal of jaew hon (Isaan-style sukiyaki, with a chili-touched broth and strong, spicy dipping sauce that leaves every other sweet, cloying dipping sauce in the dust) at lakeside stall Tik Jaew Hon and we were done, clutching at our charcoal pills and glasses of water.  A “not spicy” salad of naem (cured pork sausage) arrives looking like a crime scene out of CSI, splattered with a lurid coat of smashed red chilies. If you haven’t noticed, Isaan food also likes its chilies. Alas, I do not. I will have to return to Isaan, later. After my stomach has a nice long rest.

10 responses to “Stuffed in Isaan”