Tuna skewers and white mullet dusted with pistachio, garnish of the gods

I have known The Italian for 22 years. During our freshman year at Bryn Mawr, she lived at the end of my hall in Pembroke West. Even then, she was an effortlessly chic little blond tornado, a glamorous chain smoker with an Italian-accented Stevie Nicks croak, a high-heeled aficionado of Valentino and Missoni at a time when I was still wearing red plaid pinafores from Talbots picked out by my mother.

So when the time came for The Italian’s 40th birthday party, I was on board. A shame it was at a place that the Italian embassy workers in Bangkok claimed didn’t exist. “Lampedusa?” they said. “No, that is not in Italy.”

We checked our birthday invitations again. “But it is Italian,” we said. “It’s an island that belongs to Italy.” But only a phone call from an actual Italian person would persuade them. Even then, they were skeptical. No one had ever heard of this little island before, including me.

It turns out Lampedusa is the southernmost part of Italy, a pebble skipping off the toe of the boot, landing somewhere between Tunisia and Sicily. The island spans nearly 8 miles, and is home to about 4,500 people, who speak “Lampedusan” — a mish-mash of Italian, French and Arabic that is incomprehensible to the regular outsider. The dry, rocky soil means vegetables can be hard to come by, as is most meat (although a herd of goats did live nearby, roaming the hills around our rented cottage in an area charmingly known as “the Bay of Death”). The only thing this place abounded in: seafood, and plenty of it.

While Lampedusans may be considered a breed apart, their cooking is purely Italian — Sicilian, to be exact. The mussels and clams that proliferate in the azure waters around the island are melded with scampi, garlic and tomatoes in a sauce for pasta. Sometimes, bits of tuna or red snapper are mixed with spaghetti and crowned in pistachio dust in the way a Roman would scatter grated Parmesan. Mullet and tuna are simply grilled, or, if it’s a fancy place, once again dusted with pistachio (and then grilled). Bits of octopus and/or scampi are marinated and served as a ceviche; rings of calamari are lightly breaded and deep-fried.

A photo of seafood marinara sauce on the boat, blurred by the tossing waves

As for the sweets, fuhgeddaboudit (I’m sorry. This is the last time I do that, I promise). There is a ton of gelato, of course (I am told the best “tests” of a gelato’s quality are the pistachio and banana flavors). There is Sicilian-style granite, or finely shaved ice (coffee is, inexplicably, the most popular flavor, it would seem). There are ice cream cakes mixing coffee, pistachio and strawberry flavors. So there are all these things, but only one thing matters to me, and that is cannoli: tubes of fried dough that are filled with a ricotta-augmented cream. They are super-sweet and occasionally delectable treats while eaten at a place like Veniero’s in the East Village; in Italy, they are the greatest things to have happened to the world since Michelangelo and da Vinci. 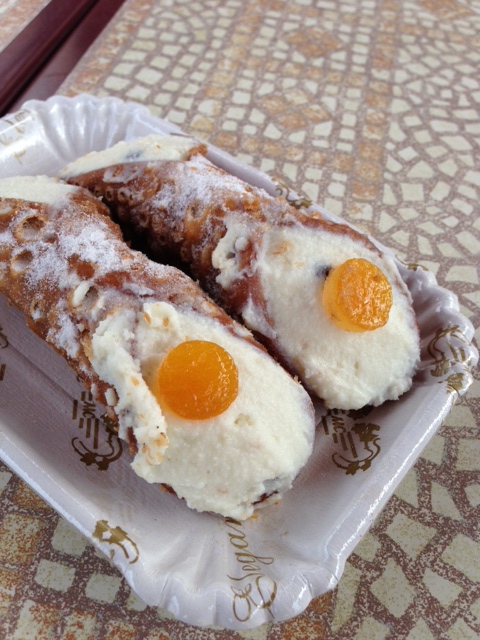 But all this fabulousness has a price, of course. Over the week, I hit a bit of a seafood wall — there is just too damn much fish. TOO MUCH FISH! Fish, everywhere, forever and ever, purple mountains of it, and fruited plains too. You see, Lampedusans love their seafood, especially their sgombro — a bonito-like fish of which they are inordinately proud that is eaten in everything including sandwiches, paired with capers and onions. Let me tell you how much they love their seafood: there are SEVERAL types of fish-based baby food. Mull(et) over that for a while.

Meanwhile, if the water is a little rough, ships can’t cross over, and you are left with a few heads of wilting romaine lettuce, a couple of withered Sicilian cucumbers, and the disheartening sight of NOTHING at the meat counter: 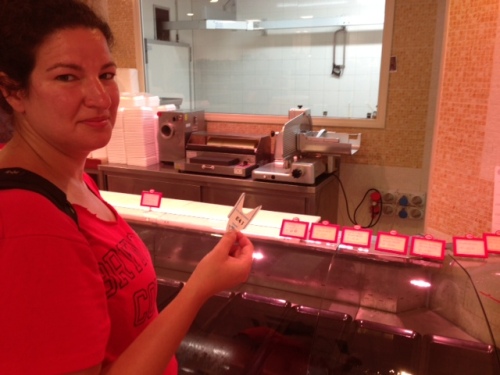 Karen, in line for nothing

At a low point, my husband and I stop at Gerry Fast Food, where we are told we can get a fix of some sweet, sweet, meat. What we get: boiled beef lung and tongue, spritzed with lemon juice and enclosed in a plain hamburger bun. We eat all of it. But we never want to go back to that ever again.