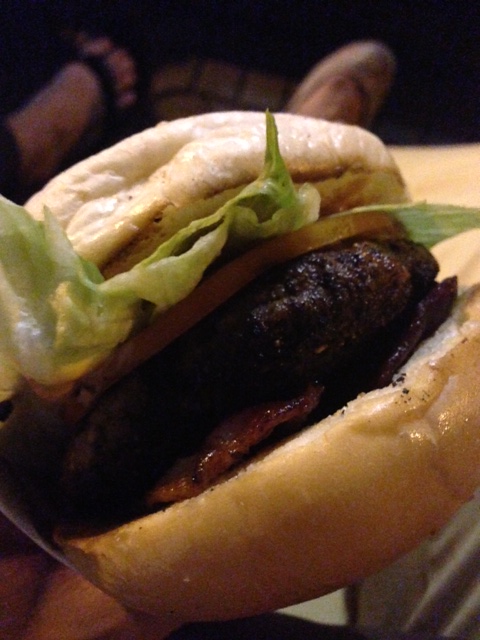 The Thaiger burger with bacon

When I just moved to Bangkok, a guy called me up. I was still new to the whys and hows of life here and was still bewildered by things like who wais who if you look the same age. So this guy called me up, and after what seemed like hours of talking about his hair, when he casually said I should “come over to his house and make him a sandwich”, I thought WOW GUYS IN BANGKOK DON’T MESS AROUND.

It turns out this fool probably really did want me to come over to his house and smoosh two slices of Wonder bread around a piece of baloney. Because since then I’ve learned that there is this weird thing about guys and their sandwiches. Let me put it another way: What is it about guys and sandwiches? I don’t get it. It’s not like it’s hard to do. Any idiot with two hands should be able to figure it out. Yet the fetishization of sandwiches not only lingers, but has grown, to zit-on-picture-day-like proportions. Case in point: the lady who was challenged by her boyfriend to make him 300 sandwiches before he proposed. You know what I’m talking about. Just in case you don’t, you can check out this link here: http://300sandwiches.com. Smart. So smart. This woman will get a cookbook deal and will be played by someone like Amy Adams in the upcoming movie. And all because her boyfriend is a doofus who can’t make his own sandwiches.

So I don’t get sandwiches in general, but I do understand hamburgers. This is a big thing for me. I can maybe say that, besides Buffalo wings, this is possibly THE thing. It’s because I live in Bangkok, where correctly-rendered versions of either of these dishes are about as rare as a talking unicorn made of ice cream. Too often, “Buffalo” wings mean deep-fried chicken wings slathered in a honey-barbecue sauce. Once, I ordered Buffalo wings at a hamburger place (these two dishes often go together under the rubric of “American shit no one else will eat”), only to be presented with a dry tangle of limbs that resembled an evil vulture’s nest. They told me the Buffalo wings were “spicy Thai wings”. WHY DON’T YOU CALL THEM SPICY THAI WINGS?

Hamburgers are similarly mistreated here. I think it is because Thais — and possibly Asians in general — misunderstand what the point of a hamburger is. A hamburger is about the meat — the beef, to be specific. It’s about having a great big slab of beef, fully grained, charred and juicy, subtly mitigated by a fluffy bun and maybe some crunchy green crap on top. A hamburger is supposed to taste like MEAT. But Thais, possibly because there aren’t as many beef eaters as in other countries, don’t really believe this. They want a patty that has everything but the kitchen sink in it — onions, garlic, carrots, whatever — in a round of something that has been minced and pounded until it resembles a fine meat frisbee. It’s the Mosburger approach to hamburgers, and it is ruining all the burgers in this town. I don’t care how many Japanese people you get to eat it.

It comes as no surprise, then, that Daniel Thaiger draws a line of hungry hamburger-lovers even before they open at around 6pm. Recent LA transplants Mark and Honey run their hamburger business out of a white food truck parked at the far end of Sukhumvit Soi 38, on the right side of the road on even-numbered days, and on the left side on odd. Like all good street food, the menu is simple and straight to the point: burgers, tasting of meat and smoke fresh from the grill, with bacon and/or cheese, wrapped in a soft bun and a wax paper sleeve that doesn’t quite keep you from looking like a big slob as you’re eating. And yes, there are pork versions too. But come quickly, because these folks often sell out by 8.30pm.