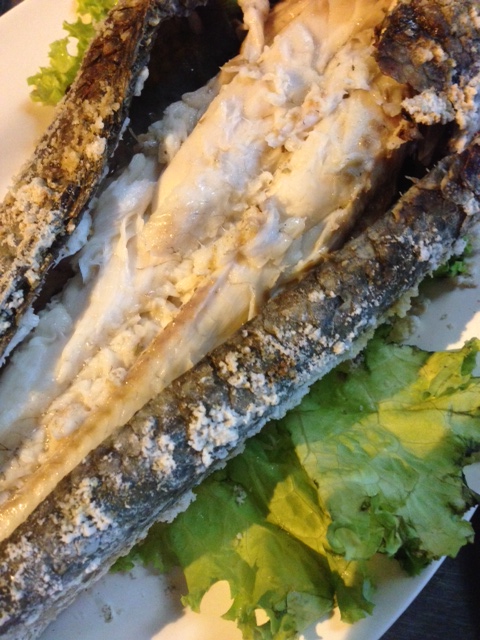 Fish grilled in a salt crust at Jay Dang

It’s official: I’m in worry for my second book, which threatens to be stillborn in Singapore. It’s hard for me to point fingers, since it is supposedly all my fault. Remember that time when I thought signing a book contract and handing over control meant I could sit back and let other people do the work? Remember that? That was foolish, me. At least there is my non-existent writing career to fall back on. Silver linings!

Let’s look at more silver linings. Such as: a movie like Pompeii 3D exists. My lack of social life means I can finally grow a beard, just like I always dreamed of. And that there are still little pockets of unique, special foodie-dom in Bangkok, existing in spite of jams and disturbances and disorders. Hanging in there until the commotion dies down. In some cases, thriving.

Example: the Isaan neighborhood on Petchburi Road, next to Ratchathewi intersection and across the street from the mosque on Soi 7. Dwight Turner of bkkfatty.com told me about this place first; later, the very talented Isaan artist Maitree Siriboon took me here when I asked him where he ate when he got homesick. By day, it’s a grimy, slightly down-at-heel working class neighborhood where you’d expect to see a lot of hubcaps sold. At night, though, the strip suddenly lights up and the people come out like Isaan food-loving vampires, basking in the dusk and the neon lighting of the restaurant signs as they are switched on: Jay Orn, Jay Goy, Jay Dang. There may be a Loong (or “Uncle”) sandwiched in there somewhere.

But the aunties are the big ones, the favorites of the diners here — either transplanted Isaaners like Khun Maitree, or chili-seeking junkies like me. In that respect, this place doesn’t disappoint: hot, hot grated papaya salads peppered with pickled crab and sprinkled with fermented Thai anchovy juice; steaming vats of soup sporting an abundance of chicken feet, bright orange in its toxicity and nicknamed thom super (“super soup”). There are strips of pork liver and minced pork or chicken meat dressed in a spicy-tart dressing and a shower of mint leaves. And, if spice isn’t really your thing, there are old favorites like grilled chicken, sliced pork collar, and snakehead fish cooked over an open flame, stuffed with lemongrass stalks and kaffir lime leaves and coated in a salt crust so that when the skin is split open, the flesh stays wonderfully fragrant and tender. There is nothing like this dish when it is done right.

A shame about the dancing shrimp: live baby shrimp that are drizzled in a tart-spicy Isaan-style dressing and served to you, as is. It is baab (a sin) to eat them, as you are causing the suffering of untold little animals, but the experience — while horrifying — is unparalleled by anything else in Thai food. When I asked about this dish last week, and the tanks that used to be at every cooking station, they all said the protests had made bringing fresh live shrimp to Petchburi impossible. Good or bad? As with everything else, my feelings are mixed.