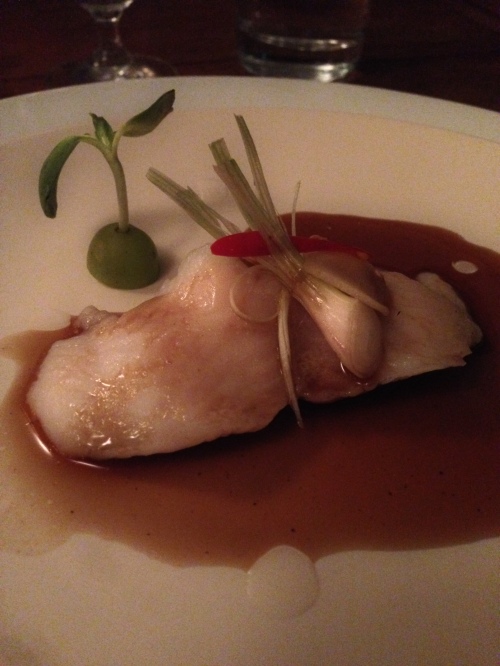 Steamed fish with soy sauce, one of the many courses at Nang Gin Kui

We all have our biases. They are shaped from our individual life experiences and form a part of who we are. If, for example, James Franco opens his mouth to say something, I am going to be predisposed against taking it seriously in any way. Same if the opinion comes from a person who refers to Daenerys Stormborn as “Khaleesi”. Nope nope nope nope. Not going to pay attention.

I kind of feel the same way about TripAdvisor. Don’t get me wrong — I don’t think it’s completely useless. It’s just that I don’t really know about the methodology. In fact, I don’t know about any methodology, because I can’t math. I can only listen to people I know and trust, who tell me where to eat (and what to do and where to go). If, however, they are James Franco or a person who calls Daenerys Stormborn “Khaleesi”, then I don’t want to hear their opinions on good restaurants. Because 1.) I am a huge Game of Thrones nerd, and 2.) I won’t believe them. How many James Francos and “Khaleesi”-lovers submit reviews to TripAdvisor? No one knows, right? This is something to consider, TripAdvisor. This is cause for concern.

Just last week, though, I got to try dinner at the top-rated Bangkok restaurant on TripAdvisor, Nang Gin Kui (aka Eat, Pray, Love. Haha. Just kidding. It stands for Sit, Talk, Eat). It’s actually the very first restaurant I’ve tried that is currently listed in TripAdvisor’s top 10 Bangkok restaurants. At #2 is Creamery Boutique Ice Creams (yes, an ice cream parlor is Bangkok’s number two restaurant), and #3 is Chef Bar, which I’ve heard good things about but haven’t tried yet. These are then followed by Sensi Japanese restaurant and The District (huh? Never heard of either), followed by G’s Restaurant (there’s another German place besides Bei Otto?), JP French Restaurant, Reflexions (at the Plaza Athenee? Really?) Old Town Cafe, and finally Le Petit Zinc (oh yeah, I have tried that place). Maybe you have been to all these places and found them excellent, or maybe you don’t know them from Jorah Mormont’s half-bear sister. It’s all subjective, isn’t it? Do you take a chance or not?

Maybe. Because, as much shade as I’ll throw on an ice cream parlor being the second-ranked restaurant in Bangkok, I do totally understand why Nang Gin Kui is TripAdvisor’s #1. It is charming, intimate, lovely and — for a certain type of outgoing, personable diner (not me) — a lot of fun. It is also really, really smart. Set on the 15th floor of the oldest apartment house in a quiet riverside section of Chinatown, Nang Gin Kui is the brainchild of architect Florian Gypser and his girlfriend, chef Goy Siwaporn, who open up their own home to grubby outsiders about four times a week. Evenings are either “meet and greets” (where a bunch of strangers gather together and try to find common ground for a few hours) or private dinners for a couple or group of people, and they serve set menus of 12 courses which change nightly, depending on what’s fresh at the market.

One of the reasons Nang Gin Kui works is that, well, very few people have a nice, cozy space with a stunning view of the Chao Phraya River. Besides Le Normandie, this probably has the best view of the river I’ve seen — in fact, it might be better, because it’s up higher. My photos don’t really do it justice. 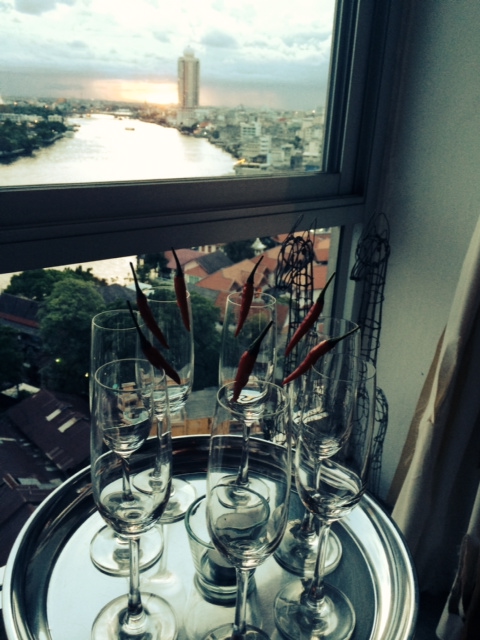 Another thing is, it’s a lot of food, with a whole lot of space in between — European-level amounts of space — that allow for plenty of conversation and digestion. The fare is mostly Asian-ish: Thai, with a bit of Chinese or Japanese and some fusion-y touches, depending on Goy’s mood. There are plenty of little nibbles to go with your aperitif, like tofu-and-sesame salad or asparagus wrapped in salmon, as well as heartier stuff (curry, grilled seafood). The cooking smartly avoids getting too fancy, or too fussy, in favor of simplicity and flavor. And food is not the only thing in abundance here; Florian is very, very good at making sure your champagne and wine glasses are filled at all times.

The ultimate effect is like a dinner party spent at the home of very ambitious and efficient foodie friends whom you’re just starting to get close to, so you’re trying to be as polite as possible to their other friends in order to score more invitations to their house. The only problem for Florian and Goy is that all I have to do is call them up and reserve a table if I want another evening with them! Something to consider, Florian and Goy. Cause for concern (for them).

NOTE: Despite my offer to pay, Florian and Goy comped my dinner. Can I be bought off by a pleasant, boozy evening full of food? Why, yes. YES I CAN. However, I also thought it was a fun experience and would have happily paid. Plus, I am not James Franco and refer to Dany by her real name. You can trust my opinion! Or not. More food for me.