Glutton Abroad: The last of the BBQ, part 4 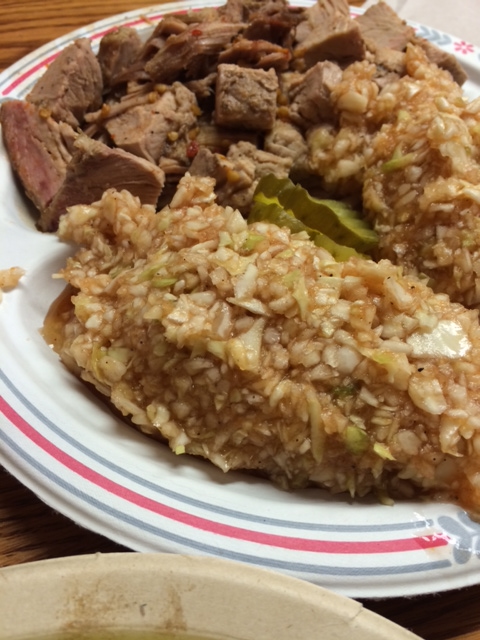 It seems like just yesterday when Karen and I were headed to the airport to start off our barbecue trip in Nashville. Now it’s been nearly 10 days and we are already headed into North Carolina, self-proclaimed home of American pork (read: real) barbecue.

If there is anything culinarily-related to inspire heated debate among Americans, it’s barbecue. And while Midwesteners may sing the praises of tomato-based sauce and Texans proclaim their barbecue to be superior to anything the Southeast may produce, it’s North Carolina I’ve been most excited about. Here, it’s not only about the sauce (vinegar-based, with a hit of chili to cut the grease — a similar approach to how Thais prepare fatty meat). It’s also about the wood — usually white oak with, maybe, the addition of some hickory — used to gently cook the pork over a low heat, perfuming the skin with its scent. This, more than anything else, separates the “genuine” barbecue from the arriviste poseur to the average North Carolinian.

There is a lot of tradition in North Carolina barbecue. Sometimes, it is baffling to the meat-loving outsider. For example, carnivores expecting a mountain of ribs that can be gnawed on, caveman-like, will be sorely disappointed. North Carolina’s barbecue is positively “dainty”, the pork served in tiny take-out containers called “trays” (aka the paper take-out containers you usually see holding fries) or on plates either sliced or “chopped” (local-speak for “shredded”). The typical accompaniment is cole slaw, the cabbage simply minced with maybe a bit of onion and typically dressed in a mix of vinegar and mayonnaise. And, like the IRS, there is no escaping this side dish, whether you want it or not:

Saying “no” to this makes you either different or a Communist (both of these things are very bad). Just accept a tray of these deep-fried curlicues as your due, the perfect vehicle for taste-testing the battery of sauces on your table.

Lexington refers to itself as the “world capital of barbecue”. So it’s no surprise that there are several well-known BBQ places here, sparking a brief debate on where exactly we should go. Of all the BBQ joints in town, Lexington Barbecue — known among locals as “the Monk” or “Honeymonk” in honor of founder Wayne Monk — is the most famous. So that seals the deal for me.

Lexington Barbecue has been around for more than half a century, and it’s easy to imagine that the menu has changed little. There is your sliced and chopped BBQ, as well as a “coarse chopped” variation that is basically shards of pork. Everything comes with slaw and hush puppies, of course, but you can also get a “side” of beans or chicken tenders or pork rinds, or if you are one of those healthy people who insist on greenery, a salad topped with cheese and more BBQ.

Out back, where all the chimneys are, 34 pork shoulders are cooked a day — unless it’s the week before Christmas, when 3-4 cooks work night and day to make enough BBQ for people to enjoy at home for the holidays. In Lexington, the meat cleaves to the typical barbecue ideal, flavored with a tomato-based sauce (as is the slaw). And of course, all meat is cooked over oak or hickory coals for half a day. The meat is left alone to cook and absorb the smoke, and is not basted. The end product, while meaty and magnanimous in spirit, reflects this. It’s a traditionalist’s kind of barbecue, as long as that traditionalist lives in Lexington.

Full of pork from Lexington BBQ, we still thought we’d be thorough and try out the rival Barbecue Center, even if only for a chopped BBQ sandwich. This probably did the Barbecue Center a disservice. Arriving late, we shared one sandwich between the three of us and were rewarded with a dry, tasteless heap of meat shoved into a cold bun and smeared with a small dollop of cole slaw. Probably not the best idea.

If Lexington is a traditionalist’s kind of BBQ town, where different generations break bread over paper take-out containers holding shredded pork topped with ketchup-y cole slaw, Asheville is earmarked as the southern preserve of the city slicker. Meaning, those hipsters who have fled Brooklyn en masse, decrying it as “too popular”? They are now in Asheville.

And 12 Bones is their kind of barbecue joint. Please don’t get me wrong: it’s a great restaurant. Any place worthy of President Obama’s patronage is A-OK by me. Take, for example, all the “rib flavors” on offer here, a first for any of the BBQ places Karen and I have visited, and definitely the only in a state awash with “take it or leave it”-type eateries.

What was available at 12 Bones when we visited

If you haven’t guessed already, ribs are the order of the day here. You don’t have to make do with plain old beans, slaw and/or hush puppies either: there’s an entire blackboard of sides for your pleasure, enough to fill the deli counter at a Whole Foods. Have some issues with gluten or lactose? Don’t worry, 12 Bones will let you know what’s up. Worried your beer is not local? There’s a whole passel of local craft beers in the fridge!

We punk out and get a “wedge salad”, which is half a head of iceberg lettuce topped with deep-fried onions and drenched in ranch dressing, sided by “four bones” of “twang”-flavored ribs. You don’t even have to stick with that flavor: the four sauces available to drown your ribs in include tomato-based, mustard-based, and two kinds of vinegar-based, one green-y and vaguely Mexican-like and the other traditionally clear.

Wedge salad with cornbread and ribs

It figures President Obama is willing to shut down traffic for a little while to get here. It’s good food, gussied up with all the right things to make it irresistible to Gen X-and-younger foodie types who are willing to slum it for a little while between meals at sushi bars and raw food cafes. Of course, I am talking mainly about myself.

Does it have anything to do with NC barbecue, other than the fact that it’s in NC? Well, not really. The real stuff is coming up … 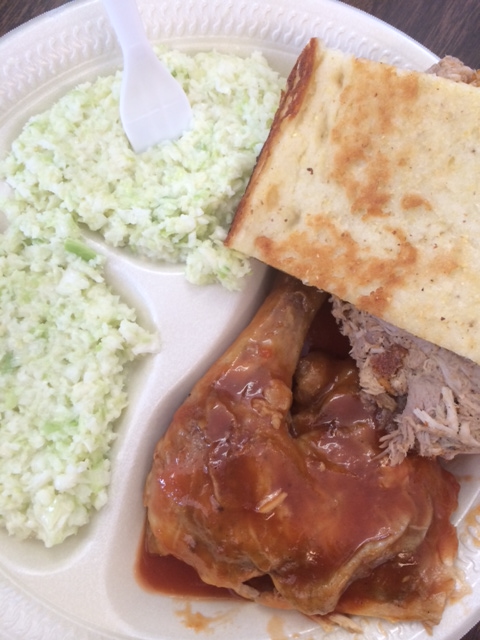 Barbecued chicken and “pork BBQ” with slaw and cornbread

When we pull into the parking lot, an entire tribe of bikers is just getting ready to leave. “Yay, bikers,” says Karen, who views the patronage of bikers the same way I see Bill Clinton’s photo: a sign that there is good food to be had. Another harbinger of goodness is the prominent Skylight Inn sign, which reads, “If it’s not cooked over wood, it’s not barbecue”.

Skylight has been in business since 1947. This is something that the elderly man in line behind us wants to share, his memories of having Skylight as a little boy. Today, the counter is manned by the type of young men who look like they could be cast in any movie about Hoosiers or high school football players. This includes the guy chopping up pork shoulders with two butcher’s knives — the only BBQ here is chopped —  and seasoning the meat with what looks like a vat of chill sauce and a vat and a half of vinegar. This meat is all about the seasoning, while the chicken (available only on Thursdays and Fridays) is a tender, melting hunk of flesh daubed in ketchup-y barbecue sauce.

The presidential endorsement here, shown in a framed photograph in the entrance, might say all you need to know about Wilber’s. It’s of George H.W. Bush. And while I don’t know much about Bush 41’s foodie credentials, I do know that Wilber’s is a true NC institution, around since 1962 and still overseen by octogenarian owner Wilber Shirley, who is at the restaurant on most days.

Unlike most of the other barbecue joints in the state, Wilber’s is a sit-down-and-order kind of place. They also have a big coterie of sides, many grown on the land right behind the restaurant: simply sliced tomatoes, green beans, corn. Here, also, there is no need to specify what kind of BBQ you want: there is only one, the pit-cooked barbecue pork plate, which arrives to the table chopped. They specify the wood is oak. Also recommended: the barbecued chicken, which is slathered in gravy instead of barbecued sauce, and accompanied by a pitcher of … more gravy. It is as fork-cuttingly tender as anything we’ve had.

Pork BBQ with chicken and gravy and sliced tomato

When we ask where the chimneys are, the waitress simply tells us they are “behind” (if it’s not cooked over wood, it’s not barbecue, right?) Once she finds out about our BBQ tour, she asks the manager on duty, Gary, to show us around. It turns out pit-cooked really means that there is no need for freaking wood-burning smokestacks. It’s out in the open, like a campfire. 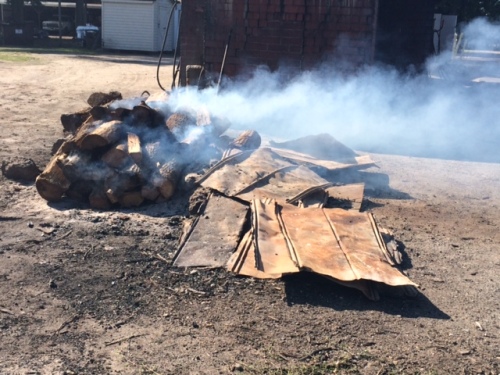 It turns out very few BBQ places are still allowed to leave their wood out in the open like this, but Wilber’s — beloved by the local authorities — can do whatever it needs in pursuit of the best barbecue.

The oak coals are then moved to the cooking shed, over which shoulders and whole hogs are placed to cook slowly overnight. This is hard on the cooks who have to tend the fires and meat in the wee hours of the morning, as well as on the shed — it’s burned down a couple of times because of sleeping attendants, Gary tells us.

Besides its chicken and pork, Wilber’s is also proud of its beef (when it’s available, as it was when we visited). This is first on my list the next time I find myself in NC. I might just head to NC especially for it.

Skylight is for the old-timers and Wilber’s is for the pit-cooking enthusiast. Hog Heaven, on the other hand, is for the type of person who reads “Herman” comics, has dinner at 5:30 and thinks signs reading “Dad’s dream: to be able to have the same lifestyle as his wife and children” are funny. Nothing against that, of course. But Karen says it best: “This is hospital food”. It’s barbecue for the Boca Raton crowd.

Case in point: there is a “vegetable of the day”. Our day was squash day. There is also something called “granny potatoes” on the menu, which end up being boiled peeled new potatoes. Like everywhere else we’ve been to lately, there is only one option for barbecue: simply denoted “Bar-B-Q”, it is a chopped pork plate. The meat is also cooked over electrical heat, something that seems mildly scandalous in NC. I can imagine Gary’s disapproving face now.

Is it something to make me return? No. Nor was it like the disappointing barbecue we’d had earlier in the day, a sandwich of dried-out pork floss at a “barbecue” restaurant that had mutated like a deadly virus into a drive-in, buffet restaurant and convention centre. That place is a cautionary tale, pointing to what can happen to your product when you’re in it for the money. We need not mention that place.

Hog Heaven was the last barbecue we had, and the last plate of shredded pork I’m likely to eat for a long, long time. Not to say I’m breaking up definitively with barbecue. I just think we need some time apart.

I think I’ll be a pescatarian for a while.

4 responses to “Glutton Abroad: The last of the BBQ, part 4”