The Beauty in Bitterness 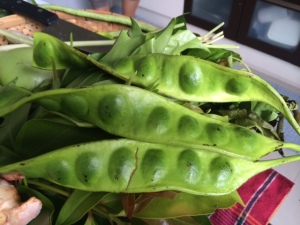 His name was Aharon. He was very smart, cute, enormously funny, and had great hair, a dark mass of curls. I harbored a crush on this poor boy for what felt like years, but was probably only months. For weeks and weeks, I blathered on to anyone who would listen about my crush on this innocent person, who had not done anything to anyone, in the same way I had bored my fifth-grade lunch table mates with stories about Michael Jackson’s daily workout routine, or how John Taylor’s favorite meal was breakfast. So it was inevitable that one of those friends would take revenge on me by actually telling the object of my affections how I really felt about him.

It was, as Karen likes to say, a sixth-grade nightmare. There is nothing worse than having your secret crush discover the audacity of your affection for him — as if you actually had a CHANCE, as if something like this could even fall within the realm of possibility. The weight of my presumption was made worse by the knowledge that he would be kind, and would not make fun of me or emit “ewww” noises like an actual sixth-grader.  He would be nice. He might even have deigned to give me hope. But that only made it worse. The fact is that someone’s affection for you, even if unreturned, leaves a terrible yoke of obligation that can either be shrugged off gracefully, severed cruelly, or borne patiently. I was sure he would have been patient. But I did not want to be present at anyone’s pity party if I was going to be the guest of honor.

I responded as one would when it is 1995 (e.g. running home and listening to Jeff Buckley’s “Last Goodbye”. We didn’t have Adele in those days). I also decided to tell him that I most definitely did NOT have feelings for him. I mean, I was going to lie. This would relieve him of the burden of having to pretend anything with me, and we could continue to at least be friends. Sixth-grade nightmare averted. So I knocked on his door and that is what I did. He never really spoke to me again.

A male friend of mine, when told this story (I am still boring people with my stupid stories, 30 years later. Welcome to my blog) said I had humiliated my crush. This, when I thought I was doing him a favor. The thought that I would miscalculate to the extent of causing this person actual distress represents a low point in my romantic life. Don’t get me wrong — as all of my ex-boyfriends would attest, there are many, many low points in my romantic life. But this is the one I remember most.

Low points are an inevitability in life. In fact, they are a necessity. Who walks downhill all the time? You need to climb uphill in order to get to that point. They provide the contrast with which the high points can be truly appreciated. Do you know who understand this? You’ll never guess.

Thai cooks are known to understand this. They are able to use low points — bitterness — in ways that manage to amplify the high notes to make them that much more dramatic, like the way blanched bitter gourd is served alongside a tamarind chili dip, or sadao (a Thai riverside herb) offsets grilled snakehead fish with sweet tamarind sauce. They provide the oomph against which the freshness of certain ingredients can be highlighted, like the thin shavings of raw bitter melon in goong cha nam pla, or raw  shrimp marinated in fish sauce. And they lend gravitas and heft to certain dishes, emphasizing meatiness, warmth and substance, like in larb muang, the Northern Thai minced pork salad. Indeed, of all the regions, it is perhaps the Northern Thais who accentuate bitter flavors the most, since bitterness figures prominently in their cooking: echoed in the flavors of the North’s many fresh herbs and leaves, or in the animal bile that figures so prominently in their meat dishes. Bitterness is a major component in the Northern Thai flavor profile, a deep, dark thrum against which salt, chili and animal fat can play.

It’s a common misperception that, to make something more authentically Thai, one simply has to dial up the spice to 11. I don’t find that to be true of either central or northern Thai cuisine. Thailand, as any long-term expat can tell you, is never that easy to work out. Instead, to make something more Thai, all the flavor facets — sweet, salt, sour, spicy, bitter — have to be represented and balanced. Sadly, this is becoming less of an imperative, even in dishes where it figures importantly, like in gaeng jued mara yad sai (bitter melon stuffed with pork and stewed in a pork bone broth). This is because the Thai palate is changing to reflect globalized tastes: becoming sweeter, saltier, spicier. In other words, more amped, more MSG’d. What this means is that dishes are actually changing, leaving out the bitter melon in goong cha nam pla or threatened with extinction, like sadao nam pla wan (Thai river herb with grilled fish and sweet tamarind sauce).

This results in the nature of Thai food changing. And no, it’s not because of farang chefs, or McDonald’s, or the media, or anything that people like to blame when things change. It was simply a matter of time. Low points — at least in food — have been swapped out for a vista of downhill rambles, a glossy world of ease and convenience where everything is a quick, Rot Dee-assisted stir-fry away from the table. But bereft of our culinary sixth-grade nightmares, how will we appreciate life’s occasional sweets?

3 responses to “The Beauty in Bitterness”