A catalogue of pet peeves 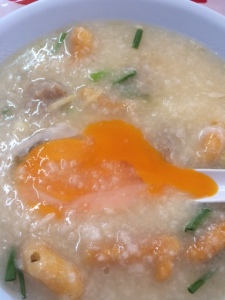 Chinese-style congee with pork and egg at Joke Ruamjai

I have a lot of pet peeves. Pet peeves — not street food — might actually be what forms the real fuel for this blog, so I nurture them, like children. My culinary pet peeves are few but strongly felt (eating soggy rice with my hands; using chopsticks with curry rice; overcooked, soggy soft-shell crabs). My social ones are similar, like people who say something is “fascinating” or “interesting” when they clearly mean the opposite.

Don’t worry, I haven’t run out of pet peeves — I have literary ones, too. Or ones for popular reactions to other people’s literary creations, like to the different houses in the Harry Potter books. Like, why is Hufflepuff the most denigrated of all the Hogwarts houses? When did qualities like “loyalty” and “kindness” become the doofiest of all the characteristics that a person could have? There are people out there who happily let all and sundry know that they are Slytherin, the house of “cunning” and “resourcefulness” and, oh yes, the occasional batshit crazy genocidal maniac or two. The ones who only wanted Purebloods to enter Hogwarts. Never mind that, though. At least you’re not Hufflepuff! As long as you’re not loyal or kind, you’re set! Phew, well done!

This also applies to many people’s opinion of JRR Tolkien’s Frodo Baggins, aka the “weaker Baggins who is nowhere near as cool as his uncle Bilbo”. I clearly disagree. I posit that Bilbo is a dumbass who lucked into the ring and took on that burden without any consideration of the toll that it could have taken from him, because he was completely ignorant (aka a dumbass). This level of ignorance enabled him to live with the ring for years and years, with barely a nick in that plastic-wrapped, impervious psyche. Frodo, on the other hand, knew. He knew that the ring was bad, and that the journey would be terrible, and that incredible difficulties lay in wait for him for very little reward. And he went anyway. Frodo is braver than Bilbo.

The Chinese-style congee known as joke is the Frodo Baggins or Hufflepuff house of Thai street food. This roadside staple, stirred for hours until the grains of rice break down into a sludgy, starchy mass, has been called “food for children, or invalids” in forums as vaunted as “Hangover 2”, but whoever wrote that has clearly not actually had joke. The best ones — uniform grains, delicious pork meatballs, ample toppings — also manage to infuse flavor into the porridge itself even before the introduction of the obligatory vinegared chilies and fish sauce. Add a raw egg, broken into the hot sludge to barely cook before the yolk is stirred into the grains to stain the bowl a sunny yellow, and you are, as they say, golden.

At Joke Ruamjai (Sukhumvit Soi 23, about 50 m from the entrance to the left, 02-258-4373), they are old hands at congee, including preserved squid with their standard pork meatballs (instead of the less popular blanched pork liver) and topping the lot with slivered ginger, green onion bits and deep-fried mini-crullers — a pretty impressive mix of both tastes and textures. The sign looks like this: 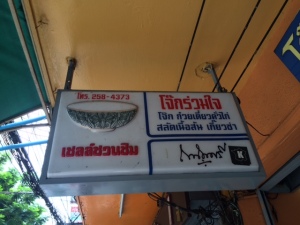 All the same, even Frodo-like joke must bend with the prevailing winds, and Joke Ruamjai also has a pretty formidable array of stir-fries at lunchtime, plus 5-6 curries and a hulking big pot of pig’s trotter, which is an impressive way of hedging your bets. 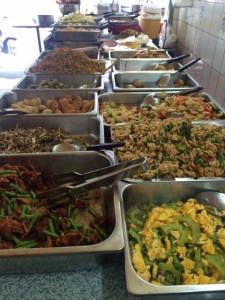 I would aim for breakfast or lunch (Joke Ruamjai is open from 7.30), but if you can’t make it until later, try to get in before 10pm.

5 responses to “A catalogue of pet peeves”