Korat is known as the “gateway to Isaan”, but there’s nothing entry-level about the Northeastern Thai food you get here. Green papaya salad, grilled meat, sticky rice, fermented Thai anchovies — it’s all there, graced with a decidedly “Korat” stamp like an edible Isaan-style “LV” with extra chilies on top, if you please.

There are as many types of som tum, or what’s commonly known as “green papaya salad”, as there are fruits and vegetables. That’s because, while the green papaya variety is the most well-known, you can make som tum out of just about anything: corn, green banana, sweet santol (known as gratawn). “Som tum Korat”, ostensibly named after the town in which it was created, veers from the usual with the addition of pickled field crab, dried shrimp and fermented Thai anchovy juice alongside all that green papaya and pounded long beans, garnished with a shower of roasted peanuts. The result is spicy and salty with a touch of sweet, in a region where sweet flavors are usually anathema.

Of course, the flavors vary depending on the chef. Despite its deceptively simple appearance and quick assembly time, som tum is surprisingly hard to get right, a tightrope walk between salt, spice and tart, with an additional hit of sweet or bitter when the recipe demands it.

At Kanom Jeen Kru Yod (200 moo 9, Moo Ban Kokpai 2, Thanon Siriratchathani, 081-548-4097), the restaurant is named after the fermented rice noodles that locals flock to for lunch to eat slathered in the gang gai, or chicken curry.  But as delicious as those noodles are, the som tum salads are just as toothsome, big, bright flavors in a jumble of fresh, crisp textures and colors. This is also the big draw at Som Tum Pan Lan (Ratchasima-Pakthongchai Road, 081-966-1497), where we waited out a torrential downpour while hunched over a plate of som tum, bulked up and chilled out with a generous handful of moo yaw, or steamed Vietnamese-style pork sausage. 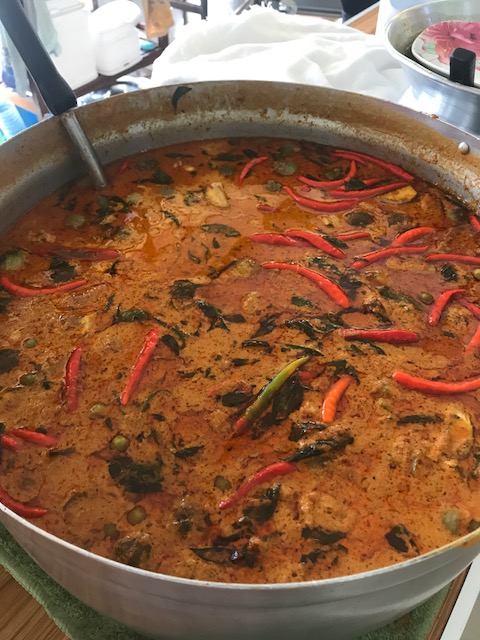 Sometimes people want a little drama with their som tum. Or something to properly Instagram. I hate to say it, as I am a big Instagram user too (follow me @bangkokglutton guys!), but Instagram is ruining food. To win more interest, restaurants are creating dishes with an eye toward how spectacular they will look in photos, instead of how these dishes actually taste. The birth of som tum tad (literally “som tum on a tray”, surrounded by a solar system of items meant to go with the som tum “star” in the middle) falls into this category, but some versions are more palatable than others. Enter Thum Saeb Gaen Khon (11/2 Suebsiri Road, Soi Suebsiri 3, 084-605-9120), which, alongside a very tasty selection of regular som tums, thom saeb (spicy Isaan-style soups) and grilled meats, offers an enormous som tum tad centered around their very own “som tum gaen khon” and less manicured than the scary specimens haunting your local food court.

When/if you get som tummed out, there are still some Korat-based culinary alternatives. Krua Khun Ton (Jomsuranyat Road) is as hidden as a hidden gem gets anywhere: tucked into an outskirts-lying development that calls to mind images of basement meth labs and Episode 4 of “True Detective” Season 1. Somehow, amidst all of this, a restaurant terrace sits behind a tranquil pool of carp and artful display of old furniture arranged around an ancient television set. Everything is good here, if the enormous crowd of people (everyone awake in Korat on a Sunday morning) is anything to go by. We settle in with a mee Korat (fried rice vermicelli with dark soy sauce, fish sauce, palm sugar, chilies and pork) and the restaurant’s signature, kanom jeen nam ya pla rah (fermented rice noodles with fermented anchovy curry). 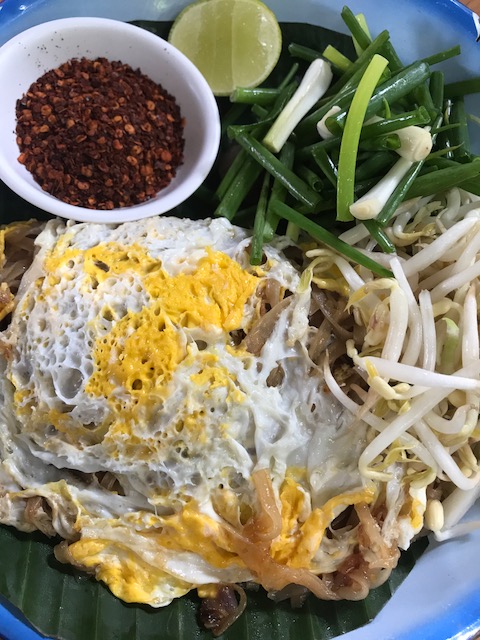 The soup — deep, salty, slightly funky and somehow sweet — is studded with thick, meaty chunks of fish and accompanied by a plethora of garnishes including shredded cabbage, pickled greens, and green foliage that I sadly didn’t catch the name of but tasted both tannic and tart, gorgeous next to the murky curry.

It’s hard to leave Korat without feeling like you have swallowed a submarine whole. But like all physically taxing experiences, like childbirth, you forget about the pain afterwards in favor of the good and fuzzy feelings. Over the course of two days, I ate enough for a week’s worth of meals. This was only a little bit of it. But damn it if I didn’t end up wishing I could stand to eat a little more.