I never planned on going to New York. It was purely a spur-of-the-minute decision. But when Karen invited me with the promise that I would be able to fulfill all my greasy spoon fantasies — at a time when diners are becoming to NY what mobile cart vendors are to parts of Bangkok — I could not say no. Also, my Gold Card status was expiring at the end of August.

So I arrive in New York at like 10 in the evening, meet up with a super-jetlagged Karen who has only just arrived from South Africa a few hours earlier, and … fall asleep.

The very first thing we do when we wake up — super early, because we are jet lagged — is go to the first diner we can think of. That is City Diner, which I love unreservedly because it offers everything you would expect out of a diner: greasy, hangover-dispelling breakfast plates paired with gigantic hash browns, crispy shards of overcooked bacon, and bottomless cups of hot coffee. Everything is, of course, delicious, but mostly a vehicle for Heinz ketchup, which is far more delicious in the US than it is in Thailand. For some reason, Thai Heinz ketchup is sweet and gloopy, like red sauce at a really bad Eastern European Italian restaurant, or a mousse at most molecular gastronomy restaurants.

I go to bed at like 5 in the afternoon.

Chopped herring, pumpernickel bagels, and a bunch of other stuff at Barney Greengrass

I love, love, love Barney Greengrass and try to go every time I’m in New York. Actually, it’s usually the first place I go to when I arrive in the city if I’m not already fixated with some other food genre (see: diners). I also love the story behind the Barney Greengrass type of restaurant — referred to as “appetizing shops”. Apparently, they were brought to New York by Eastern European Jewish immigrants in the early 1900s, and encompass all the accoutrements that accompany bagels: salads, smoked fish, herring, cream cheese and eggs, separated from the smoked meats of “New York delis” like Katz’s due to the Kosher rule of separating dairy from meat. The “appetizings” (here a noun) come from the cold appetizers (forspayz) served at the start of the meal. Even though these types of places have thinned out a lot from their height in the mid-1900s, the story of the New York appetizing shop is the typical story of the American Dream.

At Barney Greengrass we always end up ordering the chopped herring, whitefish salad, and Nova platter, because the salmon comes from Acme, considered the best smoked fish purveyor in the city. Karen always gets the pumpernickel bagel, but I am happy with anything vaguely bagel-ish, and if we are feeling ambitious, we also get scrambled eggs with onions. And yes, we are super judgy bitches, because we never ever get individual sandwiches and think people who do don’t know what they’re doing. Always order a platter to make your own sandwiches with, since it costs less for more food. Duh.

Karen and I stay up late enough to have dinner with @garethdoestheatre at Cafe Un Deux Trois, where Gareth apparently lives. I have lots of red wine and a steak tartare with fries and more Heinz ketchup, even though I am still completely stuffed.

Breakfast at Metro Diner. It’s a difficult balancing act, being a good diner: you have to be friendly but not creepy, comfortable but not so comfortable that people end up there all day long with one cup of coffee. I don’t number this place as a place I have to return to. My favorite diner ends up being The Mansion, which has an old-timey feel and super efficient service, directed with “soup Nazi” precision by a guy who is always on the floor.

Dinner with Gareth at Vaucluse, where the chef chooses what we get: grilled leeks with anchovies in a mustard seed vinaigrette, a dainty Nicoise-style salad and New York strip steak with a battery of sauces, none of which is ketchup. 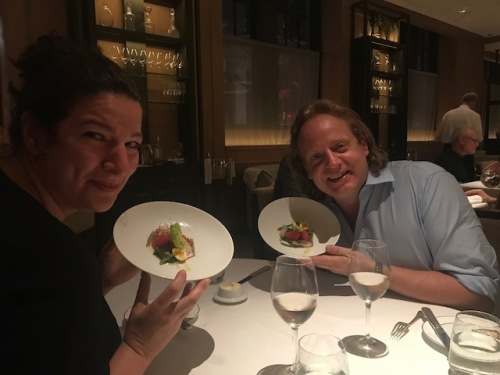 We hatch plans to trek to Greenpoint in Brooklyn to have Polish food, after which we will visit the Museum of Food and Drink (MOFAD). The one we choose is flagged by a couple of life-sized medieval knights in front, Krolewskie Jadlo (it means something like “king’s feast”), and the menu is suitably large and imposing. Karen wants to order every borscht on the menu, but after slogging to Brooklyn in 90-degree weather, I am happy with just the cold version. All the borschts we order come with a side of mashed potato (?). We also get plenty of sliced bread with lard and pickles. We also end up with pierogies, potato pancakes with Karen proclaims as excellent, and a plate of venison and walnut meatballs bathed in a brown gravy. They are out of the stuffed cabbage. 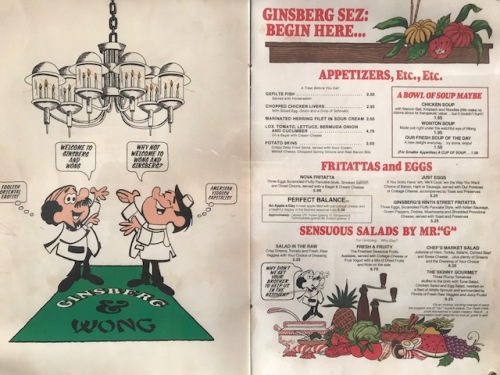 That night, we go to a midtown bar to wait for Gareth and split a slider plate: I have the beef and Karen has the chicken. We are going on the train to Long Island to go to the beach the next day.

I wake up in Oyster Bay feeling strange and out of sorts, and even though we go to a perfectly nice diner (Taby’s Restaurant, if you are interested), I can’t manage a single bite of my one-egg plate (which Gareth refers to as a “child’s plate”) and drink copious amounts of water. After breakfast, on the street in the middle of town, I throw up for the first time, ruining my Birkenstocks and my new Eileen Fisher menocore pants. I throw up two more times (in the park, in a discarded brown paper bag next to an empty bottle of vodka) and in the ambulance (my first trip!) before I’m in the emergency room. Gareth, Kathleen and Karen spend an idyllic morning in the waiting room of the Oyster Bay Hospital. The doctor informs me that it was probably food poisoning, from the slider (or the condiments — did you know bad ketchup can make you sick?) and that my red blood cells are extra-large, meaning I’m a drunk (I’ve never heard of this before, not the drunk part but the red blood cells part). Later my therapist says maybe I was just stressed.

I still find time for dinner though, because who do you think I am? I get a big bag of sea salt popcorn from Duane Reade and eat that while Karen gets us takeout from Ollie’s. I go for the steamed white rice with steamed veggies and tofu, no sauce.

For breakfast, I have the cold miso soup that accompanied my Ollie’s order, straight from the fridge. Karen says I am slowly turning into her.

For dinner, we meet up with Bryn Mawrter friends Laurel and Adele for early drinks at Maison Premiere in Williamsburg. It’s the kind of place where the service seems very good, except that it takes an hour to get a platter of oysters, and where every woman is beautiful but you want to punch every man in the face. Also, where you need to make a reservation even though it’s 5:30 in the afternoon.

I know I was hospitalized for food poisoning the day before, but I cannot resist fresh oysters when they are sitting right in front of me. I have maybe 12. ANASSA KATA. 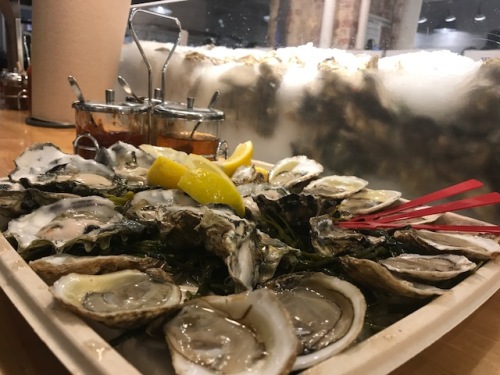 These are actually from Chelsea Market

Having successfully gone barf-free at the worst bar in New York to ever barf, I feel confident enough to steer my friends towards a Thai restaurant in Williamsburg. We then proceed to have the worst Thai meal any of us have ever had anywhere, including anything cooked by my own hand. The warning signs were not really there; the staff was fully Thai, after all. However, we could have been tipped off by the “crab rangoon” on the menu if we had really paid attention, and not thought it was a kitschy nod to the past. The green curry is reminiscent of … a green curry you would get at a molecular gastronomy restaurant (I have that on the brain right now, sorry). But when the “Thai seafood salad” comes as boiled shrimp dumped on top of a mound of iceberg lettuce and doused in a “spicy Thai” salad dressing, the alarm bells really go off. It’s not incompetence or lack of knowledge. These people genuinely do not give a shit. I know I made fun of the Thai government’s food robot a while back, but now I can truly understand and even sympathize with their feelings. Nobody wants to be blamed for spicy Thai iceberg lettuce salad. I certainly didn’t, and I didn’t even make it.

Like Godzilla devouring a Japanese village, I manage to inhale an entire gluten-free Vegana pizza at Keste, after having downed an entire lobster and a passel of oysters at Chelsea Market. It’s my happiest food day by far.