This one is about Wuanood

Note: The owners here are actually Thais who have studied abroad in the US. The basic premise (that we cross-pollinate our culinary influences when we spend any amount of time somewhere else) holds, doncha think?

I have never been a fan of Khao San Road. The bucket cocktails, the blaring music competing from both sides of the street, the endless parade of pad Thai/fried spring roll carts standing in for Thai street food — it’s all pretty much my nightmare, aside from being in an actual club blaring the Black Eyed Peas’ “Let’s Get It Started” on a never-ending loop as a bunch of fraternity bros high-five each other over my head.

All the same, the decision to clear the street of its street vendors from August 1 onwards is baffling to me in many ways. It’s not just because we always thought Khao San Road would be untouched. It’s because of the reasons behind that assumption: namely, the budget-conscious backpackers who form the backbone of the clientele there, the fact that the Thai economy relies heavily on tourism, and the likelihood of these tourists wanting to see something that doesn’t look like what they left back home. What would end up taking these vendors’ place? If you guessed 7-11, Starbucks, Burger King and some nearby shopping malls in the offing, congratulations, because I guessed that too and we are officially guessing twinsies.

At a time when Thailand is undergoing a gradual strip-mallification, Thai food continues to proliferate and flourish abroad. Sometimes it is not in the form that many Thais recognize … but them’s the breaks. Was Kurt Cobain thrilled to see fraternity bros enthusiastically mouthing the words to his songs in concert? No, he was not. Was Prince thrilled to see various people maul his songs onstage during a tribute performance? No, he was not. Cooks abroad, making food for people who are not necessarily Thai, are doing the very same thing with their interpretations of these classic dishes.

Now, when I sit down to a Thai restaurant in, say, Brooklyn and am confronted with crab rangoon and a watery green curry, do I think to myself, “Gee, I wish someone would swoop in and save me/save this restaurant?” I admit, sometimes I do. But never, ever, do I ever think the answer lies in the Thai tasting robot (I will never stop talking about this forever, because it was a genuinely batshit crazy idea). I guess I am just not as proactive about these things as Thai officials are. Also, I feel like it’s a futile exercise: aside from LA, there are just not enough Thais and Thai palates in this world to ensure that dishes in Thai restaurants from Prague to Pennsylvania taste like they do in Thailand. This is unlike the situation for Chinese food in Auckland or Vancouver, where there are plenty of Chinese people around to reward authenticity. Be happy that someone else knows about green curry and pad Thai. Count your blessings.

And sometimes, something genuinely exciting happens when you grow a cuisine abroad and see it imported back to you. People saw that with Chinese-American food, a once-derided niche that is today genuinely beloved for its chop suey, moo goo gai pan, kung pao, and of course, General Tso’s chicken (all stuff that I never got to try as a kid, because my parents liked the real thing). The things that people do with sushi rolls nowadays (tempura, deep-frying, mayonnaise) are things you are just starting to see in Japan, where now even salmon is everywhere, except at serious places where it is embarrassing for you if you order it (trust me).

In that vein, Thai-American stuff is just beginning to trickle back to the homeland. Wuanood purports to serve the same recipe as longstanding fave “Nuea Grob Noodles Behind Thai Airways” on Vibhavadee Road, but they do it with a decidedly fusion-y flair. Owned by Thai-Americans descended from the original Vibhavadee vendor, Wuanood specializes in, obviously, beef noodles, but allows you — via super-detailed multiple-choice menu — to choose the cut of beef, method of cooking, and even level of spiciness, allowing a level of customization set to please even the most persnickety of diners. Beef-averse customers need not worry: you can also get pork (Kurobuta of course) and/or a plethora of sides that include yum woonsen (spicy glass noodle salad), fried spring rolls and crunchy Korea-like chicken wings. Best of all, it’s indoors and air-conditioned, so you don’t risk heat stroke from going out on your lunch hour. If this is what the coming strip- mallification of Thailand looks like, bring on the corporate overlords. 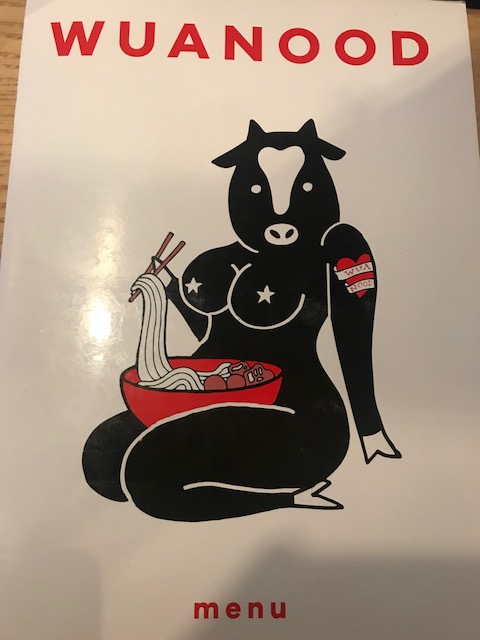 6 responses to “This one is about Wuanood”