Every year, I go to Nagano for about a week of skiing, during which I find new ways to make my legs and feet hurt. Because going up and down the stairs becomes a challenge, it helps me pretend that I am losing weight. We eat the same nabe stews every night, I drink too much sake, and I come close to being Gwyneth Paltrowed at least once. It’s pretty much the same thing every time … although I have to admit that even after 4-5 hours of skiing, a steady diet of comfort food and booze has me looking more like this than Lindsey Vonn: 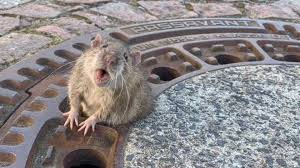 But one of the great things about being only two hours away from Tokyo via shinkansen is that … there is Tokyo. And one of the great things about Tokyo is that there is always something new to explore. It’s a lot like Bangkok in that way. My friend Naomi took us to Nihonbashi institution Taimeiken, rightly revered for churning out Japanicized renditions of Western favorites such as beef stew and breaded cutlets in a cooking style known as yoshoku and similar to some of the stuff you find in old-timey Bangkok places like Yong Lee . It’s an interesting fusion that ends up being not-quite-Western, but not-really-Japanese, either.

Downstairs is a casual, first-come-first-served kind of affair, but the second floor (reservations only) is a more dressy deal, replete with white tablecloths and shrimp cocktail on the menu. It doesn’t really matter though — either floor you choose, first-timers are still expected to order the city-famous omurice dish “chicken rice omelet”, popularized in the seminal 1985 Japanese food geek movie “Tampopo“.

The famous omurice as it comes to your table

The waiter was concerned that I did not know how to eat this dish, but Naomi assured him that I had indeed watched the movie “Tampopo”. Although I’m not always a fan of being told how to eat, I understood how important it was to the kitchen that I slit the omelet lengthwise, just enough to pierce the skin but not enough to cut all the way through to the ketchup-slathered rice beneath. The omelet’s innards, barely cooked, are then laid out like a blanket on the plate and drizzled with even more ketchup from a gravy boat in a move that is commonly known as YIKES. 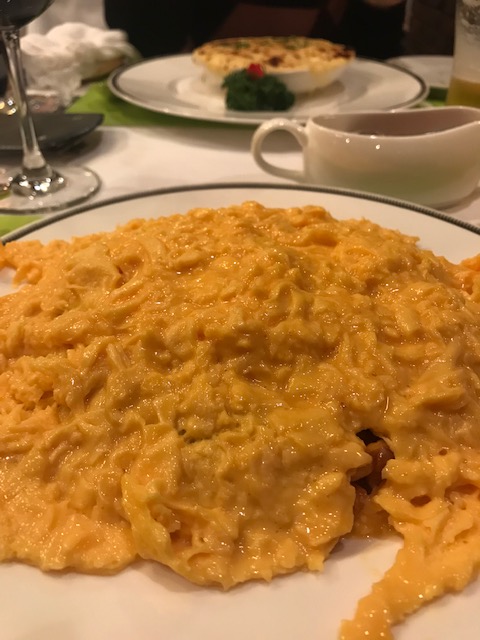 Do I regret passing up the shrimp cocktail and coquilles saint jacques for egg and rice with ketchup? Maybe kind of, but also worth it as a food tourist to say, “Oh, I had that.” Not ordering it the next time I darken Taimeiken’s door, though, which is something that is definitely happening on my next trip to Tokyo.

Another return trip I hope to make is to Toyosu Fish Market, which opened last October as a successor to the much-lamented Tsukiji. While Tsukiji’s outer market (and Sushi Zanmai, so don’t worry Thai people) is still open to fish-loving tourists, the business end of the deal — namely, the tuna auction — moved over to the new place in January of this year. 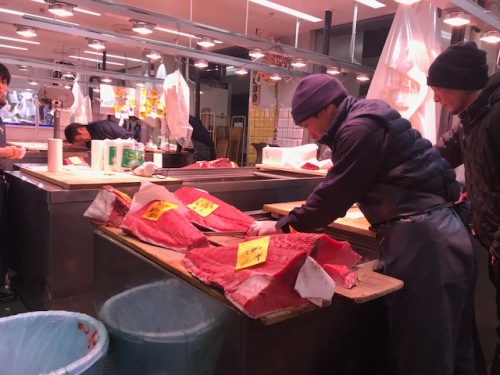 Some guys cutting up fish

To see the auction, you can either watch from an upper observation window, or apply to the lower observation deck a month ahead of time. This is so that, unlike at Tsukiji, the people actually working will not be bothered by lameass bystanders getting all up in their business. However, I have to admit, and I am a little embarrassed to say, that I totally completely lucked out by having a family friend who went to high school with one of the tuna vendors on the main floor, so we were able to bypass the auction at 5:30 and stroll on in at 7:30. And yes, I was totally a lameass bystander who got all up in everyone’s business as they were trying to go about their regular day.

Orders for the day

A maguro bocho, a sword used to break down tuna

It was worth it (for me, not for them) because I got a really lovely breakfast of maguro and chutoro, eaten with toothpicks on a table used only minutes before to break down tuna destined for the Conrad and Ritz-Carlton.

The wholesale seafood section, where you used to be able to purchase the stuff you would later find at your favorite sushi bar, is not yet open to the public. However, you can view the action from an upper observation window in an adjoining building which is accessible via outside walkway. You can also purchase some sushi paraphernalia and produce on the fourth floor of the adjoining intermediate wholesale building.

You can also simply sample actual sushi at one of the sushi bars that have relocated to Toyosu (with long queues to match). The place we hit up was Yamazaki (not yet crowded at 10am), where we got an omakase set for 6000 yen and copious amounts of beer and sake which added substantially to the bill and rendered me useless for much of the rest of the day. But hey, great for a first-time visitor, yes?