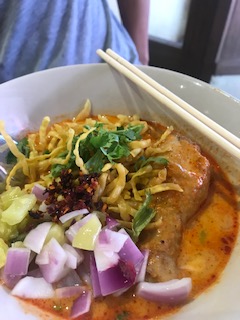 Before Winner left to visit his family in California, he took me to Maliwan Kanom Thai (Ari Soi 1) to buy 20 bags of their pandan-flavored kanom chan (layered jelly of sticky rice flour and coconut milk). It’s just one of a bunch of great street food stalls on the street — and incidentally, part of an area that was saved from being cleared by the government thanks to the vendors banning together to petition City Hall. In case you are ever lost on Ari Soi 1 and in desperate need of some Thai street dessert, you will always be able to pick out Maliwan by the long line of people waiting patiently for a shot at their sankaya fuk tong (pumpkin stuffed with coconut custard) or khao niew dum kati (sweet coconut milk-covered black sticky rice). Although the kanom chan is probably the most popular offering at Maliwan, I am embarrassed to say we completely cleaned out their store of the green ones, although the purple (butterfly pea) and brown (original) were still available. Not that this information will help you in any way today.

Despite Ari Soi 1’s cup overflowingeth with great street food choices, we could not pass up the chance to try the new(ish?) Northern Thai spot Ong-Tong Khaosoi Ari (17 Phahonyothin Soi 7, 02-003-5254), since Winner knows I love to complain about things and am rarely satisfied by Northern Thai food in Bangkok.

I will start out by saying that I have recently come back from braving the toxic air in Chiang Mai, where I indulged in old favorites at Huen Jai Yong (which I’ve written about before).

I also had a chance to try the new “face” of the Northern Thai food scene a la Blackitch Artisan Kitchen, where local food celeb Chef Black is turning Thai ingredients into exciting new dishes, with the help of a pioneering spirit and a willingness to experiment.

Ong-Tong doesn’t do this sort of high-concept experimentation, which is OK, because that makes Ong-Tong 1.) way cheaper and 2.) far less crowded (bookings only at Blackitch, and even then, be prepared to spend a lot of time by yourself downstairs in a room that resembles the cellar in a horror movie). The height of CRAY at Ong-Tong is their pairing of dry khao soy with sai oua (Northern Thai sausages), which could sound amazing but sort of lands with an anticlimactic huh on the palate. It’s sort of like Northern Thai chop suey. But you be the judge.

As for the namesake dish, khao soy, well … how bad can it get at this point? It’s egg noodles in a coconut milk-enriched curry broth, right? How can anyone hate on that and not be a total monster? All the same, I feel a little (a lot) like this dish, as lovely as it is, as much like the most popular and nicest sorority sister at the state university as it is … is sort of becoming the pad Thai of the millennial age. Ubiquitous, everywhere, inoffensive, universally loved. All hail, Asian Taylor Swift in noodle form.

Not to say that this place is one big meh. A personal favorite — and something I like to complain about almost as much as GOT’s Benioff and Weiss or Donald Trump’s face — is kanom jeen nam ngiew, a fermented rice dish that features a thick pork stew (in Chiang Mai they add tomatoes, which flattens the flavors out a bit) seasoned with fermented beans (tua nao). And at Ong-Tong, hey, it’s good! I know I wasn’t expecting it either. The trick is lots and lots of deep-fried garlic.

I’m thinking it will take a couple more decades for this dish to be as played out as pad Thai and khao soy — after all, there is still kua gai (stir-fried chicken noodles), kanom jeen nam ya (Southern-style rice noodles in fish curry) and even tum sua (somtum with rice noodles) waiting to be unleashed on the world. Until then, I can find plenty of other stuff to complain about.

2 responses to “The New North”