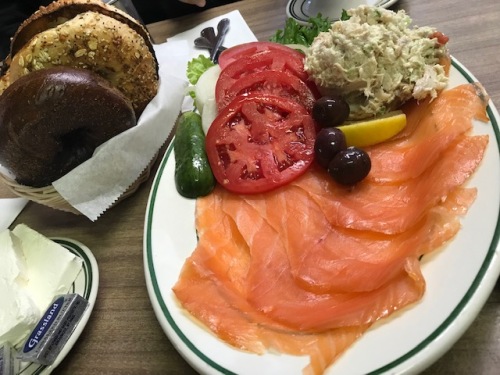 I have been traveling a bit these past few weeks, and so have not been able to update this blog, sorry mom who is my only reader. Jk. My mom never reads this blog.

I have learned a few things over the course of my travels, such as to always look where I am stepping on a San Francisco sidewalk, and that Washington’s oysters are the sweetest and most succulent. But the biggest takeaway from this entire trip was that there is nowhere — and I mean NOWHERE — that can compete with New York City when it comes to bagels, and all the stuff that comes with them.

I mean, people try. I remember ordering “bagel and lox” at a deli in Auckland and being rewarded with a shriveled, thin bagel-shaped piece of toast with a tiny hole in the middle. Cream cheese can be found anywhere, and lox can be fudged a bit. But the bagel always tells. It needs to be chewy and dense and filling, via a consistency that can only be achieved through boiling before baking. And that’s even before we get to the stuff that goes on top. I am salivating as I write this.

The stuff that goes on top are the “spreads”, the smoked or cured fish, and the salads. The spreads are cream cheese mixed with various ingredients, like scallions or lox. The smoked fish usually means lox, but it can also be sturgeon if you’re old-school, or the sweeter, less complicated Nova Scotia salmon if you’re new. And then the “salads”, which are not the salads you get at the Sizzler salad bar, but ideal for piling on top of chewy bread: egg salad, pickled herring, chopped liver, or my favorite, whitefish. Everyone has their usual order, and like a fingerprint, it is unique to them. My usual order is whitefish salad on a toasted everything bagel. Karen’s is pumpernickel, untoasted, with tofu veggie spread. My husband, on the other hand, proves he is Thai by ordering a toasted poppyseed bagel with sun-dried tomato spread. My daughter proves she is a Glutton by ordering a toasted everything bagel with both scallion cream cheese and whitefish salad. And my son proves he is 9 by ordering a toasted plain bagel with butter and jam. What can you do.

The shops that sell these things are called “appetizing” stores, where “appetizing” is a noun that refers to the cold starters that kick off Ashkenazi Jewish meals. When they settled in New York in the 1800s and early 1900s, they brought their culinary traditions with them. Kosher law dictates no mixing of meat and dairy (like cheeseburgers), so delicatessens focused on the meats like pastrami, while appetizing shops got the eggs, dairy and fish. Today, most people think of Russ & Daughter’s when they think of New York appetizing shops, but I have never gotten into the original branch, and I have another place where I’d rather be anyway. That place is Barney Greengrass.

Do you remember the theme song to the TV series “Cheers”, where everyone knows your name? Were you even born yet? I think of Cheers when I go to Barney Greengrass, even though absolutely no one knows my name. But the welcomes are always warm anyway, in a city with a notorious reputation for the opposite. To be honest, the only time I have had a negative, New York-style interaction was when the manager of an Italian restaurant told me the Pilates classes were paying off, but in a way that was not nice. What’s wrong with Pilates? (Note: I do not do Pilates).

It’s a strange relationship, the one between the waiter and the customer. The waiter holds all the power during the meal: will the food come or won’t it? Will it be what I want? Will it have been altered or unpleasantly tweaked in some way? So when your food arrives promptly, and it is delicious, and it appears to have been unmolested, a weird feeling of gratitude descends. That feeling could spread into warmth, its flames fanned from being nurtured and secure. It could even develop into … love.

Mom, I fell in love during this trip. I fantasized that the burly man bringing me platters of cured fish festooned with half-sours and unimaginably juicy slices of tomato and onion — always promptly, never forgetting — would also fall in love, and that we would run off together after my husband left me for his secretary even though he doesn’t have a secretary. His rugged beardiness would prove useful in cold weather, walking down the street, his size shielding me from the icy New York wind, his burly arms able to carry as many bags of bagels and tubs of cream cheese as his employer would allow back home, where I would be waiting, since for all its attractions, Barney Greengrass has yet to have a television.

Mom, it would be a romance for the ages. Until then, I will have to bide my time, and refrain from the temptation to order a bagel anywhere else. It wouldn’t be the same. 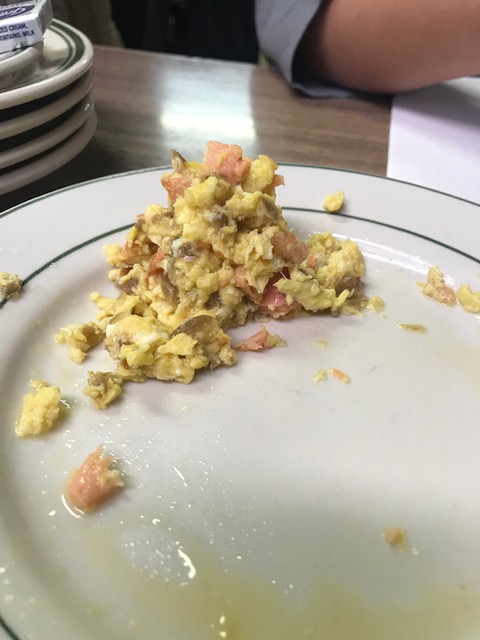 The popular scrambled eggs with lox and onions, when I remembered to take a photo