Everyone always says Japan is a country full of food obsessives, and it feels true. In places like the US — full of work obsessives — and Thailand (where it is chic to pretend to be a work obsessive), it would be considered a complete waste of time to line up for two hours for the perfect soft cream (“fresh!”) cheesecake, or wait outside in the cold for a space at your favorite beef stew restaurant behind Kabuki-za (oh, OK, it’s MY favorite beef stew restaurant). In Japan, this is seen as completely normal behavior. It takes a special blend of desire and commitment to practice this kind of stick-to-itiveness for something many others would dismiss as frivolous.

In Japan, food is not frivolous, and its inevitable discovery is considered a special time in everyone’s life. This is probably why there is such a thing as the “food manga”, comic books which document a person’s first blossoming of culinary interest (a “Fast Times at Ridgemont High” for foodies). This usually takes the form of throwing over one’s job and/or parentally-approved educational plans in favor of a backbreaking, precarious life in the food business. In Thailand, this is typically called “having a nervous breakdown”.  In Japan, it is subverting your own ego to create more beauty in the world.

No great stretch, then, to learn that there are also “wine mangas”: comics which depict the deflowering of the protagonist’s innocence re wine. My friend Ritsuko says they usually fall back on the same narrative as the food manga, except that there are lots of porny shots of sexy wine labels and hot ‘n bothered talk of “terroir”. There is no burgeoning romance, no family drama to distract the reader from the main objective — the love of wine, ideally something French and expensive:

Here, a lady is discovering her first Burgundy. Whether she is shocked because of the wine’s deliciousness or the price tag, I dunno, my Japanese isn’t that good.

And here, dude is learning how a special set of characteristics manifests itself into the soil to create the best wine evah (aka “terroir”, aka “Only French people can make good wine”.)

I kid, because I love. I love Japan, and I am a Francophile, so this is a perfect storm of awesomeness for me. I also think France produces the best wine. Haha, who am I kidding. I will guzzle wine from anywhere.

I will also guzzle sake from anywhere, including Awaji Island. Now, Awaji is a special place for Japanese food lovers, because its close proximity to Kobe=wonderful Japanese beef, while its location as the biggest island in the Inland Sea on Japan’s eastern side=great seafood, particularly lobster, abalone and sea urchin. This pretty much would have equalled heaven on earth for me, were I not afflicted with %*&^#$ing GERD (medico-speak for really bad, constant heartburn). I am old.

I wasn’t so afflicted that I couldn’t eat anything, however. Awaji also specializes in red snapper, which I am told is the same thing as sea bream. Really? I see both on restaurant menus all the time, and have noticed how much Japanese people like sea bream. In any case, Awaji Island is Ground Zero for sea bream/red snapper. It’s no surprise that they serve it as sashimi as a first course. It does come as a surprise, however, when your dinner starts moving and gasping on the table as you are taking squares of flesh off its skeleton and dipping them in soy sauce. That is a surprise. If you are old enough to remember Tom Petty & the Heartbreakers and the “Alice in Wonderland”-themed video for “Don’t Come Around Here No More”, where they start cutting pieces of Alice up and serving them as cake, you will understand what eating this sashimi was like.

This fish is still moving

If you stick around, you will be rewarded with cooked versions of this fish, grilled until white and juicy and served up alongside fragrant Japanese limes and cooked sakae, or Japanese sea snails (another specialty of the area).

As lovely as Awaji was, one could not stay there forever. There was more food to be had in Nagano, which is one of my favorite cities in Japan, no uso. Set almost smack in the middle of Honshu, Nagano acts like the country’s fruit basket — gargantuan apples, grapes, apricots, peaches, nectarines — but it also abounds in good sake, flour dumplings, grilled, miso-flecked rice cakes, and wild game. The region’s premier culinary specialty, however, might be this:

Like Thais and their soup noodles, every person in this town will tell you a different place that makes the “best soba”, and they are totally prepared to fight to the death (OK, for the next five minutes) about it. In fact, when asked to go to one soba shop, our taxi driver in Nagano refused, taking us to a different one that he said was better. In the end, it really doesn’t matter where you go because (much like many of Bangkok’s more famous guay thiew shops), you’d have to work hard to find a really, really bad one in Nagano. Most are pretty good, unless you are the world’s most discerning gourmet of soba noodles ever (95% of Japanese people).

Another, far less lauded Nagano specialty is its “apple beef”, made from cows fed on, yes, the region’s famously sweet, juicy, and large apples. Like their more famous Kobe brethren, these cows are massaged regularly so that the fat is distributed throughout the flesh, like this: 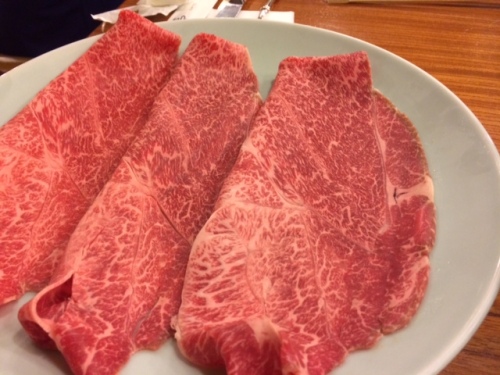 Apple beef ready for the sukiyaki pan at Sukitei in Nagano

I’ve come to believe that Japanese-style beef may be that country’s most famous “fusion” food. Popularized during the Meiji Restoration when Japan was coming to grips with Western influence, beef (and “steak”) here have since taken on qualities that are uniquely Japanese. While American beef is about the beef itself — fibers, sinews, blood and all — the flavor characteristics prized by the Japanese are tenderness, fattiness, umami. It’s meat that’s been manipulated from day one, made to be cooked to medium or even medium-well to activate the fat buried within, and then (if served as a steak), grilled before its heady baptism with soy sauce and a dollop of wasabi to cut the greasiness. I’ll be honest: this meat is too much for me, especially in my old lady GERD state. This kind of meat is meant for lucky people with working digestive systems. I’ll be in the corner gnawing on a couple of medium-rare pieces of Porterhouse.