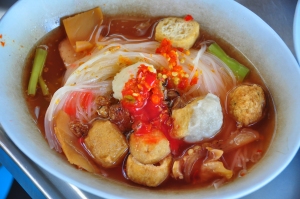 Pretty fly for a bitter guy

What is that saying again? When a door closes, a window cracks ever-so-slightly open? Oh, that’s not it? Maybe not in your case …

It’s the end of the summer holidays for me, and how better to mark this than a week full of (tearful) good-byes, (headache-inducing) family dramas, a panic-stricken rush to meet a (self-imposed but unbreakable) deadline, and a handful of (missed) career opportunities? Yay, this week! Frankly, it’s enough to send me rushing off to my kinesiologist. But not before I write this post. Because at least I. Have. This. Blog. Yes.

Maybe this is what the Noodle Nazi is thinking. What, you don’t know the Noodle Nazi? That’s what locals call him, naming him after the “Soup Nazi” from that Seinfeld episode (and whose restaurant was a few blocks away from my apartment in New York, when I lived there, eons ago). Here in Bangkok, there is a man hatched from the Soup Nazi’s own formidable mold, who runs a yen ta fo cart on most days on Saladaeng Soi 2. The shop/cart: JC Yen Ta Fo. The man: I don’t know. Hence the name “Noodle Nazi”.

Maybe his mother keeps pestering him about his daily schedule, and his editors aren’t interested in his story ideas. Maybe all his friends live abroad and he only gets to see them once a year. Maybe his snotty emails about Thai restaurants in five-star hotels are always being misinterpreted. And maybe he can’t find his kinesiologist’s number. In any case, when you meet up with him, you better know your order: sen mee or sen lek? With broth or without? And tell him fast, because there is a whole big backlog of customers waiting and the lunch hour rush is just around the corner, damnit!

Last time we were there, we were chastised for eating an order that did not rightfully belong to us (okay, maybe we deserved that one). But Noodle Nazi’s words earned the eternal enmity of my mother, who has become his sworn enemy and will never set foot on Saladaeng Soi 2 forevermore. As for me, well, I keep going back for the same old abuse. It’s eerily similar to being a freelance journalist. I am glad to fulfill this role for him. Because at least. He. Has. This. Noodle. Cart.

The noodles themselves? Well, they may play a role in my going back as well. A bewitching mix of light soy sauce, lime juice, palm sugar and salted soybean paste, chunks of fried tofu, blanched morning glory, fish meatball and the occasional squid tentacle: what’s not to love when it comes to pink seafood noodles? And these come in perfect proportions, in every bowl! Always something to aspire to!

The excellence of these noodles inspires hope. Hope to keep on, keeping on. Hope to continue being me. While I lack the expertise to open my own noodle cart (unless there is demand for a spaghetti bolognese cart anytime soon), I can continue to set my fingers to this keyboard and type utter nonsense, railing against the insipid food served at Thai restaurants in five-star hotels, waiting for that window to crack open a little bit more.