Japan gets a lot of snow. Every year, we are re-surprised by the amount of snow awaiting us at Shigakogen, where we regularly go in a feeble attempt to look semi-athletic once a year (uh, in my case at least). Some people ski for the exhilaration of breezing down a mountain face, the sharp chill hitting their cheeks as they successfully navigate this or that mogul. I ski as payment for the reward that will come after: 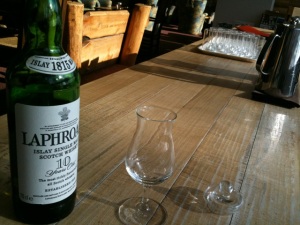 Shigakogen, like the rest of the Nagano region, forms part of Japan’s “snow zone”, which makes up fully half of the country, according to the Japanese tourism board. Tons of snow are dumped on the country every year when the cold winds blowing across the choppy Sea of Japan meet the towering mountains that form a big part of the “spine” running through Japan’s islands. Hence, the knee-deep white bounty that transforms me into the flailing autobot that everyone must navigate around in the mornings. Chilly winter wind can be good for the complexion. Direct contact with a fluffy mound of snow, not so much. Perhaps with this in mind, the Japanese brew amazake during the colder months; the hot mix of rice and sugar is very warming — and exceptionally filling. 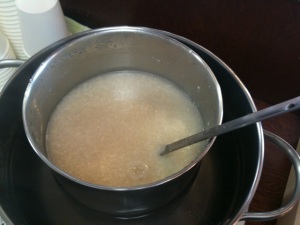 Amazake in the making

But when Nagano isn’t busy getting dumped on, it’s actually busy producing yummy things to eat with the fertile soil it hides underneath all that snow in the winter. Like Thailand’s Central plains, Nagano’s valley produces a veritable shopping cart of produce: apples, blueberries, mustard greens, mushrooms, mountain yams, buckwheat — all are readily harvested by Nagano-ites in greener times. That is probably why certain buckwheat products are considered specialties of Nagano — soba manjyu, a sort of steamed dumpling formed from buckwheat dough and stuffed with various fillings like meat or pickled greens, and of course soba, the hearty buckwheat noodle served either hot in a broth or cold with a dipping sauce, accompanied with a pitcher of the soba cooking water to drink afterwards so that none of the nutrients go to waste.

My favorite place to go, anywhere in the world, is the supermarket. It’s the best place I know of to figure out a place’s culture — or, at least, the way it views food. Are the shelves brimming with fat-free cakes and ready-made scrambled eggs and bacon, like in the States? Is there a gigantic, fresh-looking produce section, like in France? In Japan, there’s this: gargantuan, monstrous fruits and vegetables looking a little like something out of “Land of the Lost”; entire sections reserved for various types of dried fish; and unusual variations on commonplace things, like eggs.

Almost everything is seasonal: mushrooms in the fall, shirako and uni in the winter, berries in the summer. But some things have become year-round staples: strawberries as big as a toddler’s fist and super-sweet “fruit tomatoes”, like tomato candy. These we had on our first meal there, sprinkled with a little Okinawa salt.

The Japanese are gifted in the art of naming — somehow, the English-language names they give are strange yet evocative, and always memorable. That’s how you get something like “Tokyu Food Show”, the best name I’ve seen yet for a supermarket; that’s also how you get “Ichigo no Musume”, or “strawberry daughter”, the name for a mochi (rice dough) dumpling stuffed with whipped cream instead of the usual red bean paste and anchored with a giant strawberry in the middle. I would show a picture, but I am not good enough to capture things in flight … in this case, the dumplings that were flying into other people’s mouths when my back was turned. Did I get a bite of these magical dumplings this year? No sirree, I did not.

I did not miss out on the apple beef, however. A certain breed of fatty cattle similar to Kobe, the Nagano cows are fed on the region’s special apples, which are supposed to impart a certain sweet flavor to the beef. I’m not sure if that is really the case, but the beef is extremely delicious — not too fatty to turn into a grease-fest, but tender enough to melt in the mouth. Our favorite place to try it: Sukitei (600 m SW of city center Nagano, +81 26-234-1123), as much of an annual pilgrimage as the snowy, ankle-twisting doom offered by Okushiga Kogen. Aside from steaks festooned with the local mushrooms, there is sweet sukiyaki, warm and healthy shabu shabu, and a handful of delicious beef-based appetizers like salt-crusted beef cubes grilled on a skewer, gently poached beef slices served cold in a pickled plum sauce, and various types of beef “sashimi”. Here, the fattiest, decorated with edible blossoms (the yellow one is NOT GOOD) and accompanied by grated wasabi, garlic and ginger: