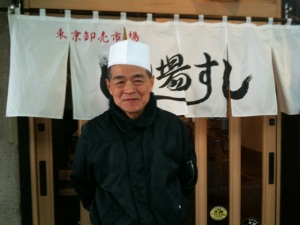 I love Tokyo. Unlike Madame Bangkok — always striving to keep up with the Lees, obsessed with what the “neighbors” might think — Tokyo is unself-consciously, unabashedly itself: scruffy in patches, unafraid to be a little seedy, but always surprising in the best kinds of ways. It has its glam side, its traditional “Nihonjin” side, its gaijin side. But you have to look actively for all of it. And at the center of all this, the spirit of the city somehow remains the same, never-changing. Of course, the flip side to this is that Tokyo can also be crushingly lonely. Alienation is also very “Tokyo”.

Well, you may not know it, considering the inexplicable fondness harbored by the Japanese for KFC, but Tokyo is a food town. The great friendships I have made here started out of food or drink. A tranche of sweet white fish simmered in soy sauce at a cooking class; a mentaiko/mayonnaise dip with snow peas before that week’s showing of Paris Hilton in “The Simple Life”; a brimming shotglass of something quick ‘n vile at Geronimo’s — these are all ageless reminders of a specific person.

As is the incredible bounty at Tsukiji fish market. Also known as the Tokyo Metropolitan Central Wholesale Market, this is the biggest wholesale seafood market in the world, handling more than 2,000 metric tons of seafood a day (according to Wikipedia). The market has been doing this daily since 1935; it, like much of the rest of Tokyo, remains constant.

Mollusks on display at the market

Aside from the seafood for sale, there is a cluster of sushiya on the far end of the market that we would visit on a regular basis for a quick breakfast before heading off to work. Turning right at the kooban (police box) into what looks like the parking lot for a football stadium, walking about 200 m and turning left into an alley leads you to “aisles” 5 and 6, where the most famous sushiya in the market are located — most with the kanji for “dai” (big) in some part of their names. The most famous of these is “Daiwa” — where the hostess conscientiously ensures you are lined up properly before heading inside — but there are others, all with their own unwieldy, intimidating queues. Inside, you might get something like this:

Also in season is shirako, a collection of creamy, mild coils that someone had once told me was fish sperm. Later, a group of Japanese people would tell me that this was not true; someone was pulling my leg. And then after that, I would look up shirako in the Japanese-English dictionary and discover that shirako is “milt; fish semen”, usually taken from the cod, anglerfish, or fugu (pufferfish). So there you have it. Shirako is not fish sperm. It is, as one kind Japanese waitress explained, “man eggs”. 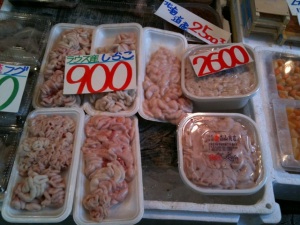 Shirako for sale at Tsukiji

Somehow, that did not turn me off of this seasonal delicacy. Another popular way to have it is simmered gently in a nabe, a sort of catch-all term for anything that is served in a hotpot, like shabu shabu or sukiyaki. Or this, served as part of an incredible eight-course “washoku” menu at tempura specialist Uofuji in Ochanomizu (+813-3251-5327).

Helmed by a husband-wife team (the husband cooks, the wife is hostess), this is one of many husband-wife restaurants serving “washoku” (traditional Japanese cuisine) across the country. But the search for this unassuming restaurant is worth it: the tempura is light and fluffy and the menu changes daily, depending on what the husband has found in Tsukiji. On that particular day, there was sea cucumber in a pool of ponzu, freshly made shiokara (fermented squid innards), a single gigantic miso-glazed oyster. And while service is a little bit slow, the waitresses sure are free-handed with the sake samples and “tastings”. Leaving the restaurant that evening remains a blur; I believe Kiguchi-san had to escort us to the taxi herself, God bless her.

But it’s hard to pry me away from the sushiya for long, especially one where a meal can be an elaborate string of yummy fish-based mini-dishes. Sushiya no Yoshikan in Gakugeidaigaku (+813-3793-6261) is well-known for their otsumami (appetizers), which they continue serving you until you indicate to them you are ready for the sushi. We managed five: shirako, grilled this time with a salt crust; tuna “shabu” in a sweet miso sauce; poached sea eel in a pickled plum sauce; an oyster in a sabayon; and best of all, a freshly-grilled scallop in a “sandwich” of nori seaweed. 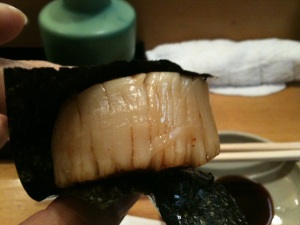 What I took away from all this, however, was the ever-present fact that I am getting old. I couldn’t keep up with my friends at the sushi counter — too soon afterwards, I was signalling for the soup (apparently osuimono, or clear broth soup, is what traditionalists say goes with sushi best, although everyone prefers miso nowadays). What can I say? Some things do change.