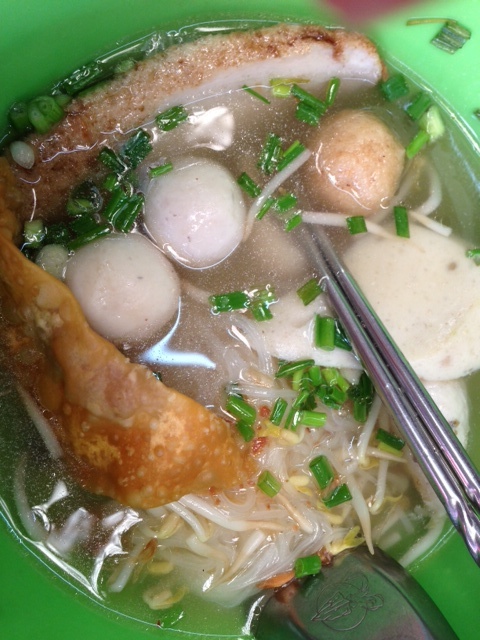 I have been even more useless than usual for the past week, because I am three years behind everyone else and have just started to get curious about this “erotic” book series where the romantic leads are an emotionally distant, manipulative weirdo and the needy, nondescript girl who worships him. No, not that one. The other one. The 50 Shades one. Mind you, I am not reading the book. I refuse to spend a single red satang on a book that is actually based on the other book but no one wants to admit it or even say it out loud. That is like having lunch in a crowded restaurant where someone at the table keeps farting and everybody still resolutely shoves food into their mouth-holes, even though farting at the table is absolutely disgusting. This is the best analogy I can muster for this book’s denial of that other book.

No, I am reading the recaps of the book, because this is the kind of world we live in now, where I can be completely immersed in the recaps of a book instead of in the actual book itself. The recaps I’m referring to are written by author Jenny Trout, and they are freaking brilliant, and have saved me from more than a couple of rage-strokes, as well as around $21 (not including shipping). Thank you, Jenny Trout.

My favorite observation of hers is when she notes the guy’s obsession with making sure the heroine cleans her plate every time they eat, going so far as to order everything for her himself. Of course, this isn’t interpreted as horrifyingly-creepy-borderline-serial-killer behavior at all. This man is just so full of concern for her, yinz guys. Why doesn’t a manly man who obviously knows better order my food for me? Oh yeah, because then I would be having my mug shot taken at the police station, having slammed his face into the tabletop 1,000 times. Seriously, don’t $%&* with my food. Which leads me to the next point: this dude is all about getting his lady to eat. Eat, eat, eat. Eat more! Just eat. They even have fights about it, where she’s all, nah, I’m a lady, so I never feel like eating, even though I’m hungry, and he’s all, this is for your own good, you’ve lost too much weight, eat it now. This is where the fantasy part comes in — because ladeez never be eatin’ enough, amirite? Ladeez always bein’ too skinny and shit. Get some meat on your bones, ladies! That’s all society wants! No wonder people read these books.

There is room in everyone’s life for some fantasy, but it’s still fantasy. Such as, say, television that will make you smarter. Or a billionaire 27-year-old into BDSM who is waiting to be healed by the love of a good woman. Or … fish noodles with plenty of flavor (segueway time). Because as lovely as fish noodles can be, the flavor they leave you with is most usually described as “subtle” or “delicate”, the kind of flavors that don’t necessarily blow you away, but leave you — if you’re lucky — comfortably sated and slightly smug, because you’ve just crammed your maw with lovely light fish instead of yucky, fat-laden beef or pork. As you might be able to tell, I’m not really crazy about fish noodles. I’ll eat them if they’re there but I won’t go out of my way for them. I guess I’d eat them if Christian Grey ordered them for me and I didn’t have the energy to murder him.

But at Raan Lao Sa, these noodles are good. Like, really good. As in, don’t-have-to-add-anything-to-the-broth good. Like every other Thai person on earth, I think I have the power to make a dish magically better by adding my own special blend of sugar, chilies and peanuts that is somehow better than everyone else’s and elevates that lowly bowl of noodles to the next level. So if I don’t add anything to a bowl, it’s a big deal.

Lao Sa is on the corner of Sunthon Kosa Road, at the Na Ranong intersection, next to the Klong Toey market and the big Rama IV-New Rachadapisek intersection. The sign is a big red and white one  that looks like this: 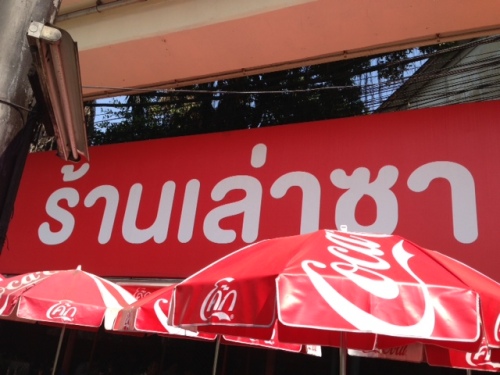 Bowls go for 30-40 baht, depending on size, and the number of different permutations is considerable; you can mix and match between noodles (thick, little, vermicelli, giem ee or Chinese-style spaetzle, Shanghai or green mung bean noodles, or sen pla, noodles made entirely from fish), meatballs (white fish, rugby-sized fish, fried fish, shrimp, fish wontons, crispy wontons, and euaguay, flat slices of meatball that are either steamed or fried), and broth (sai or clear, tom yum, yen ta fo, or a beguiling mix of tom yum and yen ta fo).

I had clear fish broth with thin noodles and mixed meatballs, and unable to stop myself, fishmeat noodles in a tom yum or spicy lemongrass broth. They were both delicious, and even mitigated the fact I stomped full-on into a puddle of stanky water on the way there. Watch where you step! And clean your plate.