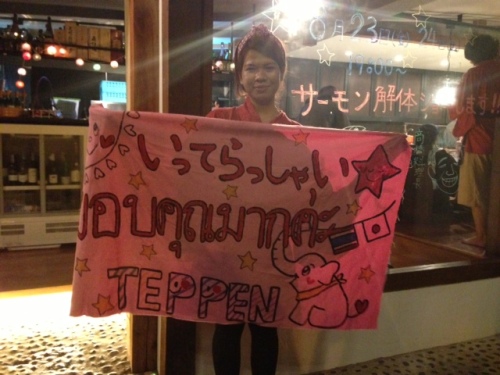 It’s that time of year again when I look back on the past 11 months and post about stuff I’ve liked under the guise of being thankful for it. Which I am, really. I’m thankful for my family, my friends, and the fact that 2013 was a pretty great year, food-wise.  I’ve managed to make a fool of myself in eight different countries this year, some of them twice! I have tried goat testicle sashimi, rancid fermented bean paste, deep-fried pork cracklings rolled in Thai spices, and countless varieties of booze squeezed from bits of wheat, barley or rice. It’s been a busy year.

But there have been some great discoveries I’ve managed to make at home, too. And — no, I’m not talking a discovery like: “don’t try to make your soon-to-be-teenage daughter feel better by pointing out that setbacks are actually a learning experience” (a revelation I have just had in the past five minutes). I’m talking I’m-gonna-want-to-put-this-in-my-mouth discoveries. Strictly culinarily, of course.

1. Teppen. It’s on Sukhumvit Soi 61, about 50 m from the entrance to the soi, on the right hand side right before you reach Park Lane (one of the neighborhood’s many, many community malls). It looks like a house and there’s not really any visible sign from the road, so it can be tricky to find. Basically, Teppen is an izakaya masquerading as some sort of sushi bar. The real stars here — aside from the “sushi” chefs who put on a “salmon show” where they race to fillet a salmon each, while shirtless — are the different types of sake on offer, which are numerous and delicious. So delicious, in fact, that my friend passed out in the bathroom here after maybe one too many. Please do not do this. I want to be able to dine here for many months to come. 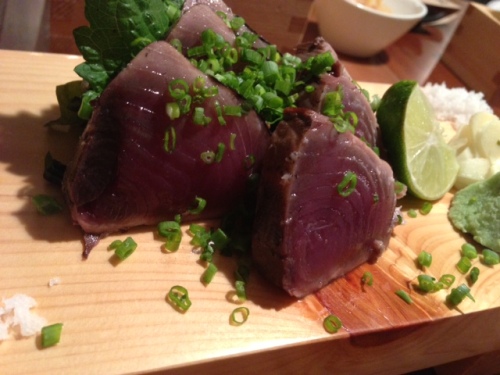 2. Gai Thong. Located on Sena Nikom 1 Road, near Phaholyothin (02-579-3898), this place isn’t really that easy to get to for Sukhumvit dwellers like me. However, this unassuming little restaurant with the type of atmosphere that translates into “Isaan diner” is worth taking the trip. What I like about this place is, essentially, the chicken: a combination of both juicy and meaty — something you don’t see much in tandem anymore. What is this craze for dry, mealy gai yang (grilled chicken)? Is this something akin to the Bangkokian fondness for the candy-sweet som tum (grated papaya salad) that will inevitably accompany it? Are cottonmouth and sugary sweetness supposed to complement each other somehow? I don’t get Isaan restaurants in Bangkok nowadays. 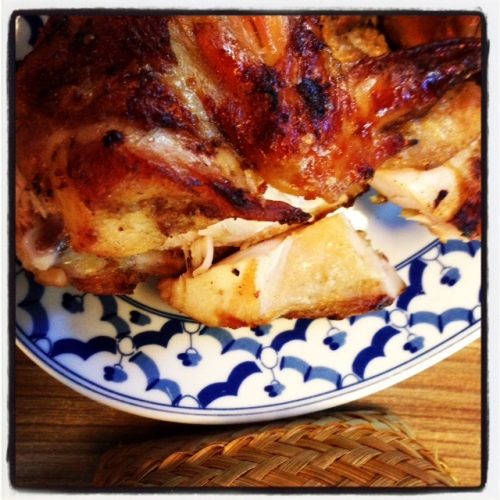 Incidentally, the som tum here is too sweet, too. I think I am doomed to wandering an infinite number of dusty Bangkok streets, eternally in search of a good som tum that doesn’t come straight from the top of a cart.

3. Places you’ve already heard about. If you have been anywhere in Bangkok lately, you have probably already heard of Appia and Opposite Mess Hall. These restaurants have only opened up in the past year! That is how quickly time flies. And then we all die. What was I saying before? …

So, what do I love about these places? Well, let me tell you guyz one thing for starters: I love artichokes. Marry me, artichokes. And Appia’s deep-fried artichokes (carciofi alla giudea) = one of my favorite foods in the world + the only place in the city that serves them. Also, co-owner Jarrett Wrisley is one of the best front of the house guys in the city. I’ve said this before, but I don’t try to say this too often because I suspect he suspects I may be trying to stalk him. <cue uncomfortable laughter>.

So, let me tell you another thing. I don’t really like chocolate all that much. No, seriously. I know this invalidates all the opinions I have spouted on this website previously, and that no one will ever listen to me anymore, and I will be alone forever. That is sad, but, I am all about The Truth. Except when it comes to the freaking Marou chocolate tart at Opposite Mess Hall. Marou is a chocolate maker from Vietnam who grows and processes its own chocolate. The fruits of its labors are then brought to Bangkok, where they are baked into a pie crust and somehow morph into food for the gods.

Opposite Mess Hall has other great dishes too, and seasonal specials like yada yada yada. I am sure they are good. I don’t know. All I can think about is this tart, which is a shame, because I prayed at the Erawan Shrine and promised to give up desserts FOR THE REST OF MY LIFE. So I don’t go into Opposite much, just in case this tart tempts me into straying. This is my life now, people. But in spite of this stupid silly vow, I still have a lot to be thankful for. Like pictures of chocolate tarts.