It’s become trendy in recent years to deride fusion, especially in Asia. This is probably because this region arguably plays victim to the greatest number of fusion-related culinary crimes in recent memory. Many diners are still old enough to remember the global fusion experiments of the 1980s, the jumble of Middle Eastern, Asian, European and what-have-you influences combined with the judiciousness of a Donald Trump backstage at a beauty pageant. With all its flavor bells and whistles, of course, Thai food was an ideal target. Many, many bad dishes resulted. It gave fusion a bad name, making its adherents look like fad-obsessed school kids doodling “Mrs. Green Curry Pizza” on their Trapper Keepers, forever too earnest, always trying too hard.

Things have swung the other way, where the pedigree of a dish is celebrated and the best recipe bloodlines harken back several generations (but not too far that the Chinese influence is gone and the dish is a tasteless mess). It’s in vogue to point out when dishes veer from the prescribed conventional wisdom, and (in Thailand at least) subject every restaurant with even middling pretensions to a test of ideological purity worthy of any Bernie bro. That’s not to say that this is coming out of nowhere; the government, if all those stories of tasting robots are to be believed, is in on it too. In an attempt to control how things taste, there is now an official way to cook things, an exercise as useful — and ultimately, auspicious — as my quest to lose 10 pounds.

I was thinking of this while eating kimchi quesadillas and short-rib tacos drizzled in a chili-soy vinaigrette at Kogi BBQ in LA, an example of the type of fusion food people hate, except when they love it, because it tastes so good. Yes, a Korean and Mexican melange sounds like the very worst sort of foodie fever dream, a mishmash of two Southern Californian-favored cuisines that seem to have only “Hey, we’re not white” in common. Who knew it could be this delicious? 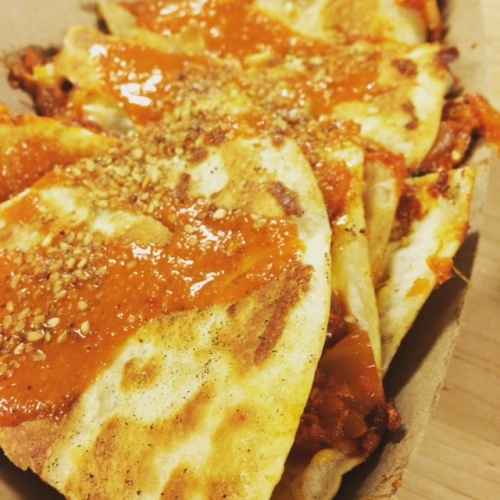 Later on, in Sonoma, I dined on a heaping big plate of avocado chaat (cubed ripe avocado piled over potato and lashed with tamarind sauce and coriander chutney), kale pakoras and naan layered with ripe cherry, cheese and coriander at a restaurant called “Delhi Belly” — I know! I know that it sounds terrible! Do not scorn me, Bernie bro! But I enjoyed myself regardless, because that weirdness was something we would never see anywhere else. It was uniquely American and, so, covetable.

When asked at a dinner party once what my favorite Thai restaurant was, I said that it was Silom Pattakarn (which has since moved). The person laughed. “That’s not even Thai food,” he said. Which is true. It is an Asian translation of Western favorites, made with Asian ingredients and Asian cooking techniques. According to Chef McDang, this type of cooking might have originated in the court of Rama IV, who hired many Chinese cooks to create a menu of “Western” dishes for visiting dignitaries. This type of menu is now replicated by a (rapidly dwindling) stable of Chinese-Thai restaurants that sprouted up in the wake of World War II and introduced a new generation of Bangkokians to the West via this Chinese-Thai-European fusion. The dishes that all of these places had in common: beef tongue stew, steak salad, and an Anglo-Indian chicken “curry” that, on occasion, would be served with slices of toasted white bread.

I don’t know where Silom Pattakarn is now, so in its absence, I go to Pattakarn Agawe, located on Rama IX Soi 7 off of Rama IX Road (romanization is tricky for Thai words so it could also be Agave, Akaway, what have you). The beef tongue stew is the best I’ve had, but everything else is pretty good too. Just think: even though it’s the fusion that someone undoubtedly railed against those many years ago, today it’s still considered delicious enough to put into a category all its own.

Chicken curry with a cucumber-shallot-chili relish